Here’s a bit of “Wait… what!?” news. IDW Publishing and DC Comics have announced a new mini-series from Sam Kieth, creator of The Maxx and co-creator of The Sandman. Kieth is returning to The Maxx for the first time in over 10 years and he’s bringing Batman with him. Wait… what!? 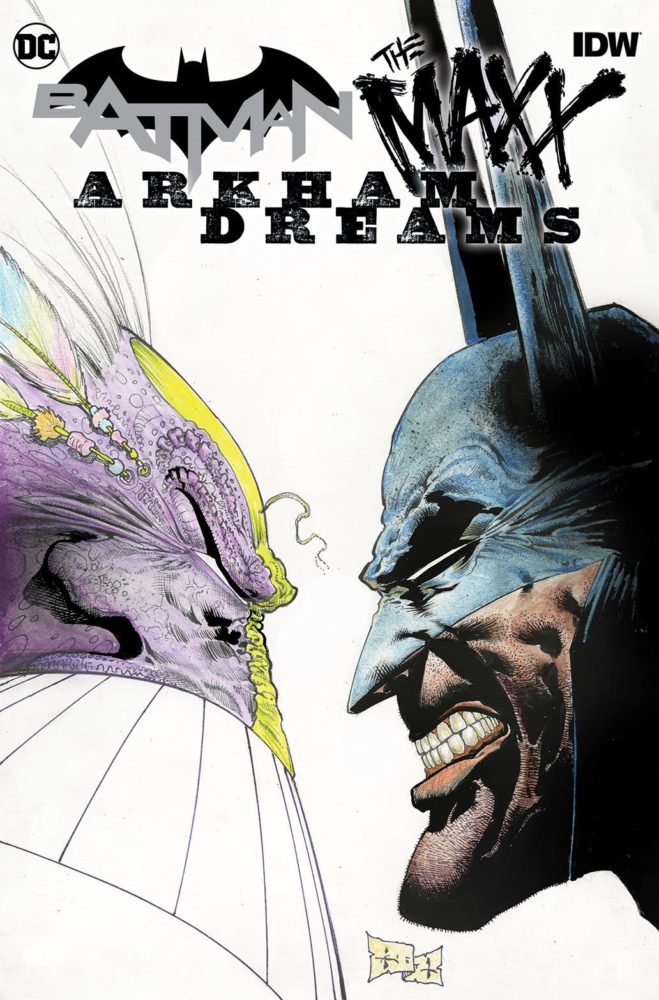 SAN DIEGO, CA and BURBANK, CA (June 21, 2018) – Batman must face the strangest adventure of his career as he meets the most bizarre hero in comics: The Maxx!

IDW Publishing and DC proudly welcome legendary artist Sam Kieth (The Sandman, Wolverine) back to his first Maxx story in over a decade, teaming his greatest creation with the Dark Knight for a mind-blowing five-issue miniseries event. The first issue of Batman / The Maxx: Arkham Dreams will debut this September with covers by Sam Kieth and Jim Lee.

“Doing a Batman and Maxx crossover is like a family reunion with my favorite brother and our really cool cousin,” says Sam Kieth. “You never want it to end… or at least I hope you won’t!”

When a devious new doctor at Arkham Asylum conducts unconventional forays into the human psyche, he kicks off a disastrous chain reaction by experimenting on Arkham’s newest patient: The Maxx! The city of Gotham soon begins to merge with the Outback, The Maxx’s psychedelic mental landscape. It’s up to Batman to save Gotham and all of reality… but only by joining The Maxx on a trip into the darkest depths imaginable: the twisted minds of Batman’s greatest enemies!

“It’s always a pleasure to work with Sam Kieth,” says editor Scott Dunbier. “He puts his heart and soul into his art, and gives you something truly unique in the process. We can’t wait for people to see this!”

For more information on purchasing copies of Batman / The Maxx: Arkham Dreams, contact your local comic shop or visit www.comicshoplocator.com to find a store near you.

Sam Kieth is a comic book writer and illustrator, best known for creating The Maxx and co-creating The Sandman. Kieth first came to prominence in the mid-1980s as the inker of Mage and Fish Police. In 1989, he penciled the “Preludes & Nocturnes” story arc of writer Neil Gaiman’s celebrated series The Sandman. Four years later, Kieth created, plotted, and illustrated – with script assists from William Messner-Loebs and Alan Moore – the original series The Maxx, which ran for 35 issues. In 1995, The Maxx was adapted as part of the short-lived animation series MTV’s Oddities. After a lengthy hiatus from comics, Kieth returned in the early 2000s with the series Zero Girl for DC Comics’ Wildstorm imprint, followed by Four Women and Zero Girl: Full Circle. In 2010, Kieth wrote and illustrated the original hardcover graphic novel Arkham Asylum: Madness, which spent two weeks on The New York Times Best Seller list, reaching number five in the category of “Hardcover Graphic Books.”