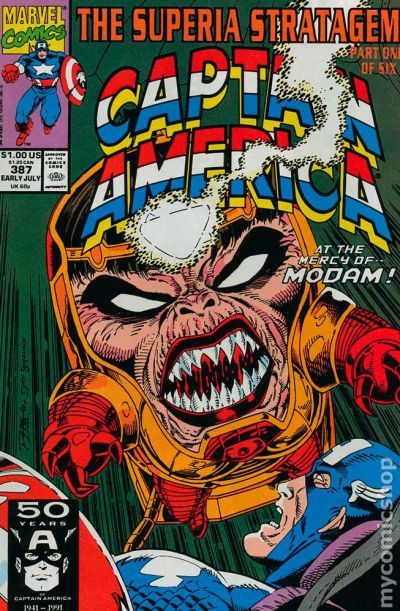 Captain America (v1) #387
Publisher: Marvel Comics
Available From: mycomicshop.com
Disclosure: The above link is an affiliate link. If you click through and make a purchase we may earn a commission at no additional cost to you.
"Maiden Voyage" Part 1 of 6. Guest-starring Paladin. Script by Mark Gruenwald. Pencils by Rik Levins. Inks by Danny Bulanadi. Cover by Ron Lim and Danny Bulanadi. Diamondback, Black Mamba, and the Asp have won an all-expense-paid cruise to the Caribbean onboard the S.S. Superia! Sounds like a lot of fun! But the three former members of the Serpent Society are very leery about their cruise director! Modam! Acting on a hunch, Diamondback activates her homing beacon as she boards the cruise ship! Fortunately for Cap's favorite serpent lady, the Sentinel of Liberty and his temporary partner, Paladin, happen to be in the area visiting the island base of Advanced Idea Mechanics! Are Paladin and the star-spangled avenger going to join the cruise? Not if Modam cancels their boarding passes…permanently! Cameo appearances by Anaconda, Puff Adder, and Rock Python. Second story: "The Masque Club" Script by Mark Gruenwald. Art by Dan Panosian. While dining at his exclusive club in Washington D.C., the Red Skull receives some bad news from Armin Zola! Someone has destroyed the skull's spare clone bodies! Wasting no time the Red Skull assembles the Skeleton Crew and assigns them the task of hunting down the culprit! Who is bold enough to challenge the Red Skull? Cameo appearances by Baron Von Strucker and Hauptmann Deutschland.