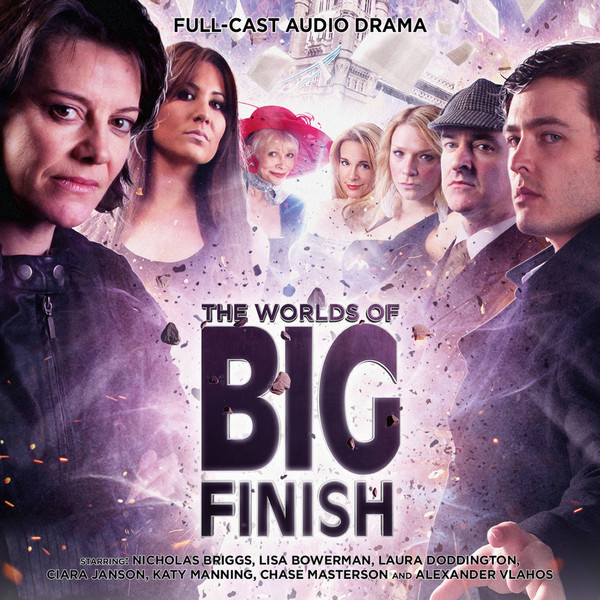 [Disclaimer] I fear I need to admit something right away: I love Big Finish and I love Doctor Who… I love Big Finish because of Doctor Who. I love that Doctor Who is not the sum total of what Big Finish does and I’ve listened to Big Finish stories that are not Doctor Who related but… yeah, I’m one of those people. I listen to Big Finish mostly for Doctor Who so a good portion of their catalog falls squarely into my wall of shame. It was for exactly that reason that I felt supremely compelled to pick up Big Finish’s celebratory 15 year anniversary release of The Worlds of Big Finish which included ranges like Bernice Summerfield which directly relates to Doctor Who, Iris Wyldthme which tangentially relates to Doctor who, along with other ranges that don’t directly relate to Doctor Who except via Big Finish crossovers. Yep I bought Worlds of Big Finish because it was a convenient way to get a taste of all these characters at once. Please keep this in mind as I review this release from the point of view of a complete newbie.
“And you say this book is of great importance?”
In the 15 year anniversary of Big Finish they announced several awesome projects and The Worlds of Big Finish was one of them. Well, having picked up a few of the Big Finish anniversary crossovers, and being quite impressed with each of them, I thought even though I am not particularly aware of the these ranges that they could be really good. That made this a huge opportunity to find out more about them… I was not disappointed.
In their September 2014 release The Worlds of Doctor Who the Big Brains at Big Finish (see what I did there?) did an incredible job of tying in several of the Doctor Who spin-offs in a clever way with a shared story arc and central conflict that spanned all the decades and several stories. Each story remained unique to their particular ranges and could almost stand alone. With The Worlds of Big Finish it was really no different. Their writers have gotten quite good at taking a plot device that can span so many different types of story without feeling strange or out of place in any of them. Hence you are able to do a story that incorporates Sherlock Holmes and the 700 year old time traveling dame Iris Wyldethyme and somehow it all works!
I won’t lie the closer the series related to Doctor Who the easier it was for me to love it. Hence the Bernice Summerfield and Iris Wyldethyme portions were wildly interesting and entertaining to me. But I found myself equally enjoying several of the ranges I’d not thought to try in the past. The Dorian Gray piece in particular struck me as very well done and anytime you get to hear Nicholas Briggs deliver a line you know you are in for a treat because he’s just such an audio pro.
So just to hit all the bases this brilliant crossover deftly wove a story involving characters from the Graceless, Sherlock Holmes, Dorian Gray, Iris Wyldethyme, Vienna, and Bernice Summerfield ranges. Each chapter of this tale is self contained in a quick episode per represented range. Despite all of the compartmentalization they still managed to start and end the story in a very clever way which tied everything together and tied the loose story up, too.
The first act really was strong and as a result kept that whole story very compelling even in the ranges I went in not knowing a single character unless they were in a previous chapter.
Now as a complete newbie? Yeah, I had a few hiccups. Yes, I think if I knew more about each of the ranges I would have enjoyed this more but even without knowledge the story was very good.
Would I recommend this as a starting point to friends who were not familiar? Maybe. It definitely DOES make me want to listen to more of these ranges and that wouldn’t be the case if I had found this story boring or pointless which I definitely did not. On the other hand if these were my introduction to Big Finish for the first time ever I feel like this set of stories is a little convoluted at times to drop a brand new listener into right away. That’s really very hard to say because the plot was tied together really well via a very simple common element but for whatever reason this story does raise SO MANY questions and doesn’t always deliver all of the answers for us. That does not in any way diminish from the ending of this story as they do pull it all together in a way I did not expect.
I didn’t review The Worlds of Doctor Who for this site but if I had it would likely have been 4-5 stars so given that, I would easily give The Worlds of BIg Finish 4 stars as well. If you haven’t listened to Big Finish Audio Drama because you thought “well, I’m not actually a Doctor Who fan” you really don’t need to be because Big Finish clearly delivers incredible stories each and every month.

Rating: 4In the 15 year anniversary of Big Finish they announced several awesome projects and The Worlds of Big Finish was one of them. Even though I am not particularly aware of all the Big Finish ranges this is a huge opportunity to find out more about these ranges… I was not disappointed.

Indie Comics Spotlight: The Third Rail and the Art of R10 Creations

REVIEW – Doctor Who: Planet of the Rani