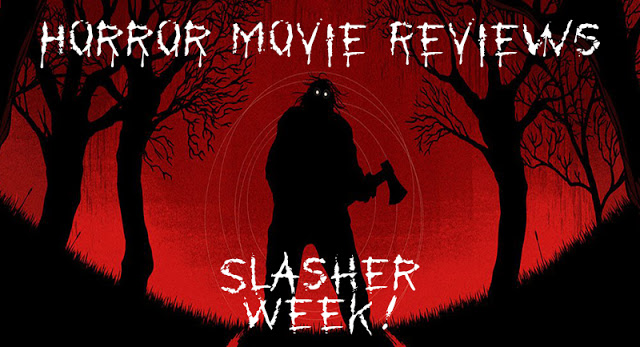 The horror movie reviews keep piling up like dead teens in an 80s slasher movie. Speaking of, this week’s horror viewing is full of nothing but mysterious maniacs stalking woods full of immoral youngsters. I continue last week’s fall down the rabbit hole of summer camp slasher flicks… right to the bottom of the barrel.

After watching the Cropsy-inspired The Burning last week a little research lead me to another Cropsy-inspired movie in production at the same time. While The Burning stuck with the premise, this film went another way and Madman Marz was born. They even gave him his own original theme song!

Madman is another summer camp slasher film chasing after the success of Friday the 13th. It rides the formula and checks the boxes like most of the other slashers I’ve watched these last two weeks. It opens with a campfire story that establishes the killer’s backstory. Actually, before we get to the Madman Marz legend one camper tells a “scary tale” in the form of a song which was unusual. Do people actually do that? Regardless, the Madman Marz mythos is then established followed immediately by a camper doing that thing you are not suppose to do… which is simply calling out his name in the woods. It doesn’t help that they are telling this story within a literal stone’s throw from the supposed killer’s house.

From there the movie unfolds as you would expect. This is one of those “here is the killer’s backstory told as a campfire tale, the killer is real, the killer starts killing” entries so no mystery here. This is a middle of the road slasher movie. It is not groan worthy so that alone sets it above many of it’s counterparts but also lacks that miscellaneous standout element that launches certain films towards the top of the heap. The main batch of characters are quirky and odd which helped reel me back in when boredom started to sink in. The murder scenes are relatively well directed, drawing the sequences out long enough to build tension without overstaying their welcome. This movie follows the “one murder every 10 minutes” rule to a tee! Once they start you can almost set your watch by it.

This is a fairly well put together entry in the genre with a hulking maniac, well handled murder scenes, and acceptable surprise here and there. However, I felt my attention wondering several times throughout the movie. While I don’t expect well developed characters from a movie like this it didn’t take any strides to make me particularly care what happened to them. This first time watch of Madman felt like 2 and a half awkwardly sung campfire tales out of 5.

Good Halloween watch? This camp slasher has one up on many others in that the season fits. It takes place in the fall just before Thanksgiving. It actually looks like chilly weather so it may be more fitting the typical Halloween time of year than many summer camp movies. If you are looking for a slasher you’ve seen before, sure, give it a go.

Directed by Andrew Davis, who would later go on to direct films like Under Siege and The Fugitive, The Final Terror is an odd entry in the slasher genre. In fact, if it were not for certain slasher tropes surrounding the murderer I would consider this more of a survival thriller than a slasher movie. It ignores a lot of genre conventions which simultaneously adds a bit of interest but also detracts from the experience. Example, on one hand it surprises you by not going where you might expect but on the other hand it feels aimless.

A group of Forest Rangers meet up with some female friends and set out into the forest. Half of the characters are much more fleshed out than your typical slasher fodder while the other half are left with very little to do. Can you guess which half? Bet you can. Which is unfortunate because the cast features a few notables like Daryl Hannah and Rachel Ward. It also features Joe Pantoliano and while his character is over-the-top his performance is fun. The performances all around are a notch above many in the genre.

One shouldn’t judge a movie against what they expected it to be but The Final Terror very much presents itself as a slasher movie complete with a campfire telling of some maniac’s backstory. You know, like nearly every other slasher movie of the time. When the film then bucks one of the most common elements of the formula it left me wondering “wait, is this it? Has it started?”

Honestly, I really liked how the end played out despite guessing the identity of the killer. It feels like the movie tries to mislead you but at the same time spells it out early on. The journey to the end of the film, however, is full of ups and downs. There are suspenseful moments and well shot scenery but the characters make ridiculous decisions and leaps in logic. The major flaw working against The Final Terror in my opinion is simply that it is a bit dull. I found myself waiting for the movie to end and because of that I rated it 2 and a half random ‘shrooms found in a hillbilly’s shack out of 5.

Good Halloween watch? Not so much.

Angela is back! The third installment in the Sleepaway Camp series opens and before we even reach the camp grounds Angela, played again by Pamela Springsteen, is chasing down a teen with a garbage truck through the streets of… some city, I don’t recall which, doesn’t matter. She assumes her identity and we are off to camp again. It is one year after the events of Sleepaway Camp 2 and an odd couple have reopened the camp under the premise of mixing upper class teens with lower class “troubled” teens.

I reviewed the first two Sleepaway Camp films last week and enjoyed each for different reasons. Discovering that this film was shot back to back with the 2nd by the same film makers I thought it might be worth watching. The 2nd film seemed to celebrate and poke fun at the genre. There was some enjoyable meta-commentary. Here, there is none of that. If the film makers were attempting the same thing with this film they failed miserably but honestly it doesn’t feel like they were trying very hard. Either they gave up, missed the mark, or I misread the 2nd film entirely.

Sleepaway Camp III feels lazier, cheaper, and uninspired. According to Wikipedia the film had the same budget as Sleepaway Camp II but it doesn’t seem to translate to screen. It looks cheap with a much sparser cast and next to no real set dressing. The kills are unimaginative and the characters are cookie cutter stereotypes. One could say the stereotype characters combined with themes of racism and classism that the film touches on is a commentary on said themes… but I don’t think this film merits deeper analysis.

The previous film is no masterwork but Sleepaway Camp III is a truly disappointing follow-up. I enjoy Pamela Springsteen in the role of Angela quite a bit and for that alone this lame duck gets bumped up to 2 firecrackers in the nose out of 5.

Good Halloween watch? Nah, it is not a very good watch in general.

By this time in my slasher film journey it was clear I was on the downhill slope. Every single slasher flick on this and last week’s Full Screen Bleed posts were first time watches for me and it seemed I was starting to scrape the bottom of the barrel. So I embraced that fact and threw on Cheerleader Camp.

Cheerleader Camp follows a group of cheerleaders (there is a name for that right? Like a gaggle of cheerleaders?) to a… you guessed it… cheerleader camp where they will face off against other groups in a cheer competition. Our main character, though much of the movie is spent with a cast of 3 or 4 central characters, is plagued by nightmares and an all around moody disposition. Then the bodies begin to pile up.

I thought this film might make for some good, trashy fun and the general attitude towards it seems favorable but this was a painfully bad watch. The production is fine. It is not a bad looking movie in fact but none of the characters were remotely likable, the kills were uninteresting, and I was bored by it. This film’s major offense, though, the thing that made me actively dislike this movie was the attempted humor. When we are not following the relationship troubles between Alison, our lead character, and her creepy boyfriend we are following the exploits of the film’s comic relief.

Of course, in a movie full of cheerleaders you’ve got to have the fat guy comic relief, right? It is the worst brand of 80s comedy. Trashy, cheesy sex comedy exploits that mostly revolve around the fat guy trying to spy on and video tape nude women and people having sex. Forced Porky’s style comedy where the fat guy dresses in drag to spy on sunbathers because… fat guys in drag are funnier when they get caught peeping on women? I’m not overly sensitive to 80s “wacky hijinks” that more resemble sexual assault than comedy but have never found it funny and it is certainly not funny here.

To this film’s credit it takes the mysterious killer approach which I find preferable to knowing who the maniac is right off the bat. Are the owners of the camp up to no good? Has Alison lost her mind? The film makes an honest attempt to keep you guessing though the truth is fairly easy to pick up on. For this attempt, the fact that when things fall apart at the camp they fall apart fast, and some serviceable performances I give Cheerleader Camp one bloody pom pom out of five.

Good Halloween watch? No, pick any other slasher on this list before this.

All Them Spider-mans – Nights

REVIEW – Doctor Who: And You Will Obey Me