I thought I’d try something different and review… A service!…. Sorta. It’s a service that sends you products. By now subscription boxes are nothing new. Nerd Block and Loot Crate seem to be the Big Two right now but there are subscription box services popping up for nearly every nerd thing you can imagine. Food, comics, horror, movies, books… wait books? So… like the book of the month club? Wait… OMG this is the sneak attack return of the Columbia House Records club isn’t it?!  No wait…. apparently that’s actually coming later this year. All kidding aside this idea is not a new one, you sign up you get stuff some of it you might like some you might not but ultimately you pay to be surprised.

I’m not going to lie to you, this one was totally an impulse buy. The good news about that for you as the reader? It means this is not a paid review nor is it a ploy for you to sign up via some affiliate program… I simply spent my money on a whim and now you get to see if I was satisfied or if I have buyer’s remorse. So am I going to be pleasantly surprised or woefully disappointed?

How They Hooked Me- Every month Nerd Block tells you that you’ll be getting “something” from a handful of fandoms. This month they hooked me with the promise of a “Rick and Morty” Nerd Block exclusive. If you’ve listened to the Grawlix Podcast you likely know that Rick and Morty is right up my alley, add in the promise of the Ghostbusters and Back to the Future and how could I refuse? The marketing is strong with this one.

Sign Up and Billing- First let’s talk about the process. The process of signing up and even switching between blocks (you can choose between Classic, Comic, Horror, Sci Fi, Arcade, and Jr) is really easy and you could switch every month if you wanted to. There are several pricing options that you can choose from, you can pay monthly, you can pay for 3 months at a time, 6 months at a time or you can pay for a full year upfront. The longer your commitment upfront the better your monthly discount is.  If you sign up for the month to month billing and you come on hard times? You have the option of suspending your block subscription for a number of months or cancelling it outright at any time right in your account settings the interface is really slick and user friendly.

For the purpose of this review I’ll be reviewing one of their Classic Blocks. In their classic block, you get a T-shirt exclusive to Nerd Block, 4-6 collectibles, estimated value at $60.

I signed up and I eagerly awaited my shipping notice.

Their Branding- So while I wait for my box to arrive in the mail let’s talk about their branding. Nerd Block’s branding is really solid. The look of their site is colorful and fun, their logo is crisp and cartoony and is likely to appeal to all sorts of people interested in geeky cartoony fun products. I think their marketing and their branding is what ultimately had me choosing Nerd Block over Loot Crate for my first go at this kind of thing. And when the block itself comes in the mail it’s clearly marked… 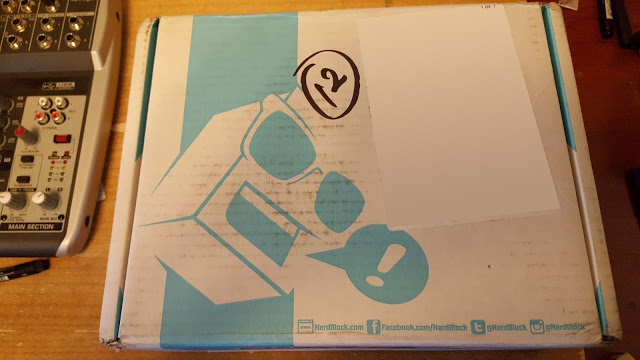 Okay that actually? Might be a point against it. If a kid walks by my house on the way home from school and the mail courier leaves this package on my doorstep? That might be pretty inviting for someone to swipe. It’s the same problem Amazon.com has with their super recognizeable packaging but… Loot crate is ALWAYS full of toys and a shirt. I could see that being pretty tempting to the wrong kiddos. That’s not necessarily Nerd Block’s problem but it seems like a thing maybe I would worry about and really don’t want to worry about. I might feel more comfortable with Loot Crate’s more subtle packaging.

The Take- Okay enough is enough! What did you get? How’d you like it? I’m going to rate each item on a OMG/Like/Meh scale because… Nerd Block does a pretty good job of curating these items, I definitely see the appeal of each one, but I’m not gonna love it all and some I might “get” but won’t really care about.

Okay so I open this bad boy up and I see… 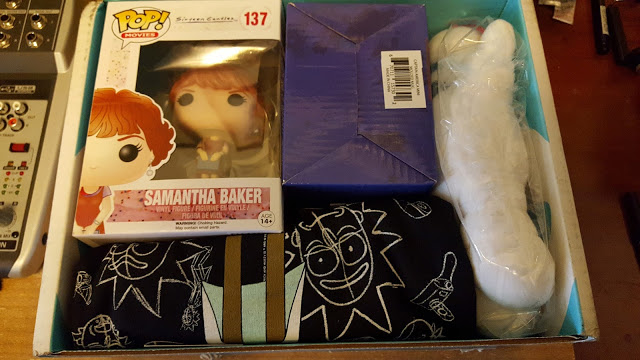 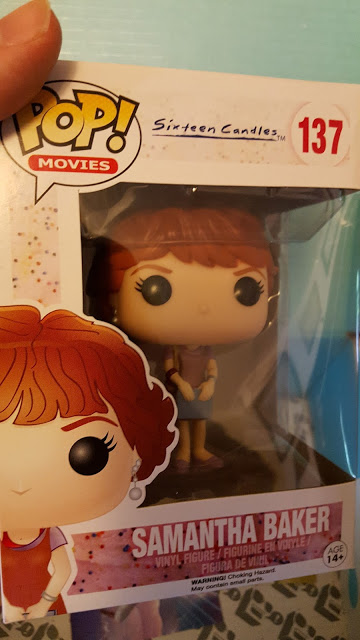 But on the upside… 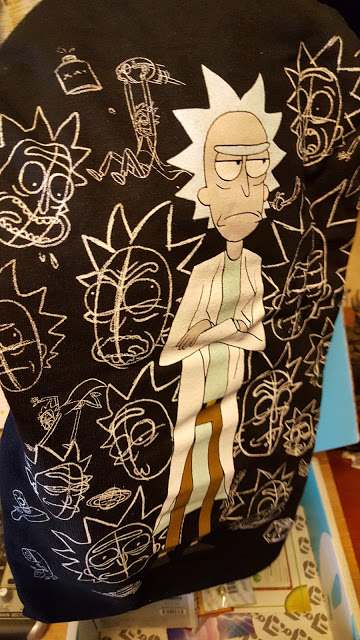 WUBBA LUBBA DUB DUB! The shirt is a total win! I love it, the Nerd Block has nearly paid for itself right here. I like the simplicity of the shirt here, owly Rick surrounded by Rick facial sketches?! Yeah the shirt is a hit.

So we have a less obvious box and some kinda plushie… I pull the box first to find… Captain America Head Shaped Mug! 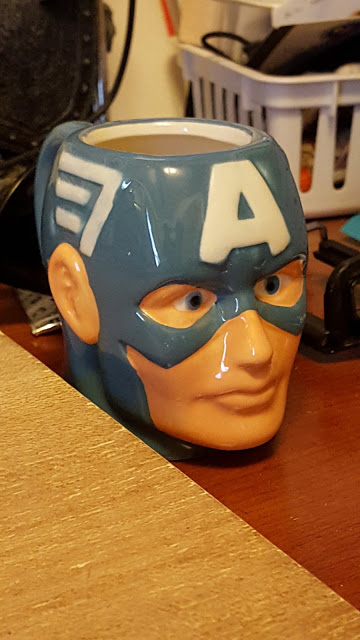 Riding high on my Captain America 3: Civil War buzz I’m happy to see I got Cap and it’s even a classic Cap mask with his ears sticking out and little wings on his head! YAY! I mean I wouldn’t prolly buy this normally but if I received it as a gift I’d totally keep it and display it proudly.

The plushie turned out to be none other than The Stay Puft Marshmallow Man done by The Monster Factory. 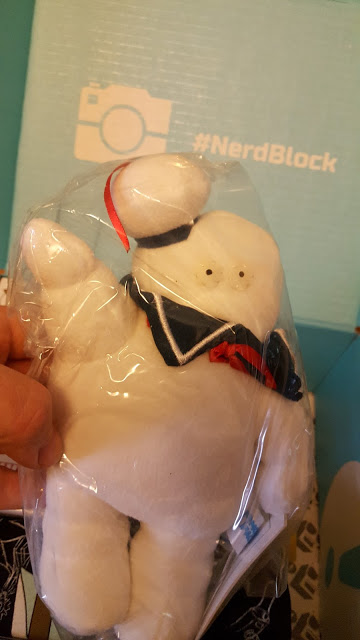 Okay yeah I don’t have a lot of plushies laying around but… this one makes sense. Again, I don’t know that I’d buy this for myself but I really like Monster Factory and I loved Ghostbusters, and worst case scenario I know a ton of people I could regift this bad boy to if I didn’t need to keep it.

Finally we get down to the bottom of the box and there’s two more things hiding down there.
Next is…. Etch a Sketch Post it Notes.

I like the idea, I think it’s clever, but Post it Notes don’t get me all that excited.

Last but not least, was this Back to the Future Licence plate pin. 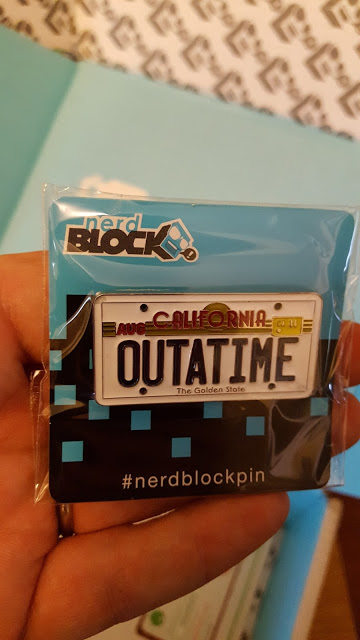 Normally this might not seem like a huge thing but I’m a huge Back to the Future fan and I’ve got a little shrine kinda started from some cool Loot Crate exclusives my good friend Andrew Schmidt sent me. So this pin FITS RIGHT IN! Yeah I dig it you can tell it’s well made so I ended my unboxing on a high note.

The results are in- and this Nerd Block was equal parts OMG, Like, and Meh. Now to be honest, really there’s only 1 or 2 things in here I might regift, and even the sticky notes I will totally use, so I’m gonna call this box a resounding success. The Funko did bum me out a little though because I like Funko Pops but this just isn’t one I would care about… but I can totally give this to someone as a random act of kindness and make their day and I fully intend to do so. This one paid for itself and I’m satisfied.

Would I Continue this Monthly Subscription? I have to admit I went into this little experiment very skeptical. I thought that for the money I would likely just find something I actually WANT and just buy that one thing. I cannot however argue with my results in this month’s box. The math alone, I loved the pin and the Shirt, the shirt would easily cost me $12-$15 on some shirt-a-day site if not more. The pin would likely cost me another $8-$12 alone and if I liked the Funko Pop that would be another $10 item on its own, and I could conceivably sell the one I got. That’s to say nothing of the Plushie, the Mug, and the Post its. This thing was a bargain and I do love a bargain.

Now this is where the packaging again rears its ugly head… I don’t like how in the box it’s totally obvious that this thing is a Nerd Block… I mean I suppose Loot Crate is distinct packaging too but I think it’s a little more subtle. I don’t think I’d be as worried about a more subtle box sitting out on my porch if I wasn’t home to receive it immediately.

I guess I’m giving this a huge “maybe”. They turned me around from being skeptical of the whole thing to being kinda on board. I REALLY like that you can put your subscription on pause if money gets tight and that you can swap genres and try out other blocks, I think those are really smart features of the site. Nerd Block does have a lot of cool licensed properties to pull from and the value is pretty darn good. I think I’d give it a go again or I would at least buy this as a gift subscription for someone for their Birthday. Yeah… a Nerd Block would be a rad gift for a Pop Culture fiend or as a fun care package for a kid away at college.

Have YOU found any cool curated subscription blocks? Nerd Block offers a Comic Block has anyone tried that? Is it any good or should I just stick to the Pull List model? If you have any good tips or any cool Subscription Box treasure trove stories let me know in the comments below or send them to us via letters (at) grawlixpodcast.com.