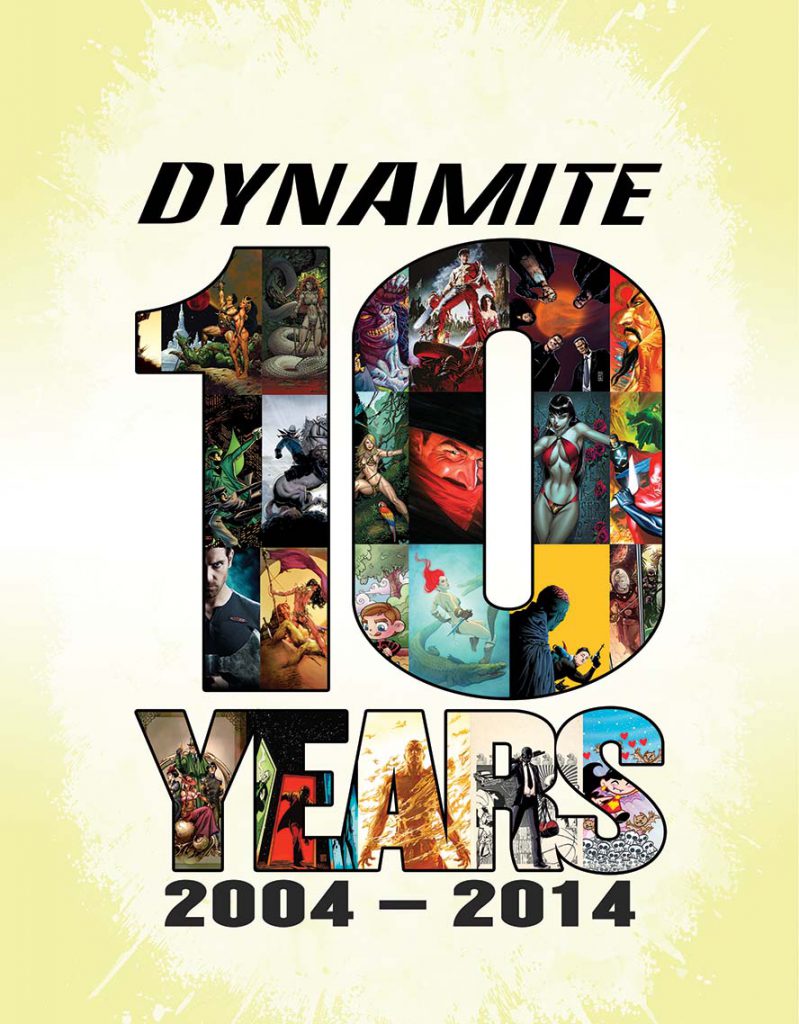 Dynamite Entertainment is excited to announce the debut of its brand new digital comic program featuring DRM-free comics. Launching initially with comics available in PDF file format, the initiative makes a selection of its most popular and celebrated titles ready for download today directly by consumers.  The sale of DRM-free digital comics coincides with the comic book and graphic novel publisher’s 10th anniversary celebration, and can be found at their company website’s dedicated digital sales page: http://dynamite.com/digital/.

In celebration of their 10th anniversary, Dynamite will offer ten of its comic books at 10 cents apiece, introducing new readers to Dynamite’s most accessible and successful titles at a great value.  The introductory-priced comic books include:


Following today’s launch, Dynamite plans to release its DRM-free comics on a weekly basis, every Wednesday, with new offerings announced via the company’s Facebook, Twitter, and website as they are made available for download.  There will be a slow, focused roll-out over time that will grow the available titles to reflect the vast majority of Dynamite’s library.

Throughout its first month of operation, Dynamite will donate ten percent of all sales to the Comic Book Legal Defense Fund, a non-profit organization dedicated to the protection of the First Amendment rights of the comics art form and its community of retailers, creators, publishers, librarians, and readers.

Charles Brownstein, Executive Director of the Comic Book Legal Defense Fund, says, “CBLDF is delighted to be named as the charitable partner for Dynamite Digital! As comics advance in so many new directions, the CBLDF remains vigilant in our efforts to protect the comics medium in each aspect.  Dynamite’s contribution underscores our commitment to protect comics in the digital environment as vociferously as we do in the comic store and education spaces.”


“The market has been growing for DRM-free content. Each and every day, fans want to choose how to buy and enjoy their comics, and we’re taking our titles to the next level for digital sales,” says Nick Barrucci, CEO and Publisher of Dynamite Entertainment. “Expanding into DRM-free content, made available directly to consumers from our website, is simply giving the consumers the option for what they want and how they want it, and continues to reach out to a non-traditional comic-reading audience.  Our hope is that the availability of comics in a digital fashion will continue to draw new readers to the medium, helping to complement the growth for physical sales through our retail comic store partners.  Following the trend we’ve seen over the past few years in our industry, the world’s continuing love affair with books in print will benefit from a surge in Dynamite interest.”

Barrucci adds, “As part of our launch, we’re donating a portion of all sales to support the Comic Book Legal Defense Fund.  Charles, Alex, and their team work tirelessly to protect our First Amendment rights.  The Fund needs the help of the industry to support free speech.”


“DRM” (Digital Rights Management) refers to the technology used by publishers, copyright holders, and other individuals to control the use of digital content and devices after sale.  Dynamite’s goal is to offer their titles DRM-free, thereby growing the company and granting comic creators more opportunities to make great products.  Dynamite is eager to take this next step with fans as it continues to expand on its own digital offerings.

Dynamite’s current digital offerings include same-day-as-print releases through Comixology, iVerse, Dark Horse, iBooks, and Amazon Kindle.  Recently, Dynamite worked in conjunction with Humble Bundle, Inc. to offer a 10th Anniversary bundle for sale for a limited time, dedicating a portion of profits such worthwhile charity organizations as the Comic Book Legal Defense Fund, Doctors Without Borders, and the Make-A-Wish Foundation.

Join the conversation on Dynamite Entertainment’s twitter page at http://twitter.com/DynamiteComics.

To find a comic shop near you, call 1-888-comicbook or visit http://www.comicshoplocator.com/.

Sam Kieth Returns to The Maxx… with Batman!