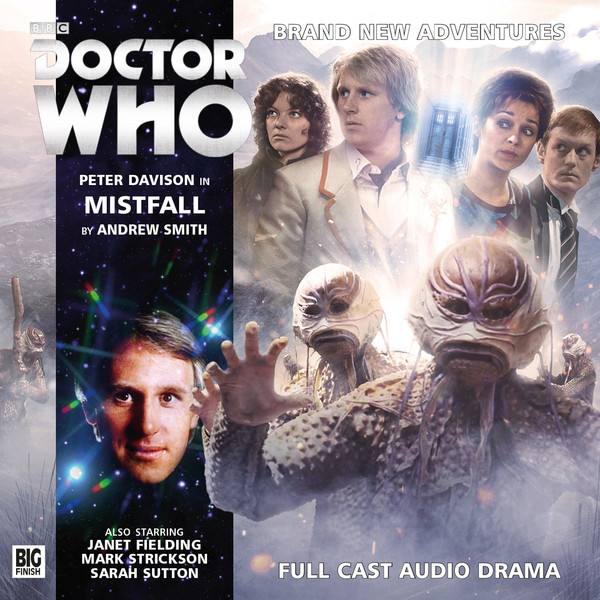 “Adric often talked about how the ecology of Alzarius changed every 50 years or so.”
“Mistfall…”

The TARDIS is drawn off course when it passes into another universe, one that’s nearly impossible to get back to… E-Space. The Fifth Doctor, Nyssa, Tegan, and Turlough find themselves back on Alzarius nearly 300 years after the events of “Full Circle.” They must survive the Mistfall again as they attempt to work out how to best exit the universe contained in E-Space.

The fifth doctor and his full TARDIS crew find themselves in E-space as the result of Adric’s original plan to return home. The calculations for the return trip had been stored in the console so that when the conditions were right the TARDIS was drawn back to Alzarius. So despite not having Adric on board for the trip he is referenced heavily in the early part of the story to help keep the plot moving forward. Much like the Big Finish stories that finished out 2014 this Main Range Doctor Who story feeds the hunger created by nostalgia nicely. Being penned by Andrew Smith we as the listeners are not the only ones returning to Alzarius. Smith (who wrote the original TV story set on Alzarius “Full Circle”) did a nice job tying things together, explaining why everyone is back on the planet, what they are up to, and expanding what we know about the planet. He also catches us up with what’s been happening in e-space without bogging us down in too much exposition.

As you might expect this story is greatly enhanced by previous knowledge of “Full Circle”, with a member of the “Decider” council back on Alzarius and a new group of “Outlers” stirring up trouble it might be confusing to a listener who hadn’t seen or read that original tale.

From the perspective of someone who has seen Full Circle and does understand what’s going on? This story was super fun.

I think that audio adventures that feature this many companions suffer from the same problems that TV stories suffer from. You have to be kind of formulaic about splitting up the group which means two almost separate stories happening at the same time. Over all I think Big Finish and Smith handled this as well as you can, but when the split up occurs it feels like a formula and took me out of the story for a moment.

In Summary: I really enjoyed this episode and I think folks who liked Full Circle are really going to enjoy it as well. It’s as a sequel of sorts and in that role it does quite well. Given that, I do think this story really needs that connection the original as it heavily informs this story. I think if you come in not knowing the original you’re going to have a tricky time keeping up with what’s happening. I don’t think every story needs an absolute stand alone factor but when setting up a trilogy I think it’s pretty important that the scene is set for me without drawing too much from something else. So to folks who are new to E-Space I’d caution you: To really get full enjoyment out of this story I’d at least seek out Full Circle first. Without doing that it’s not impossible to follow, it’s still a great story on it’s own but in my opinion you will likely feel like you are missing something without that previous knowledge.


I’d give it 3.5 stars, I loved it so 3.5 seems low in light of that, but I didn’t enjoy it quite as much as The Rani Elite and the story did get a little confusing at times.

It’s smartly written, the music is brilliant, and was such a fun way to return to Alzarius and E-Space in general. I was looking forward to this release and I’m eager to see what’s coming up next in this trilogy.


Rating: 3.5
The Fifth Doctor, Nyssa, Tegan, and Turlough find themselves back on Alzarius nearly 300 years after the events of “Full Circle.” They must survive the Mistfall again as they attempt to work out how to best exit the universe contained in E-Space.