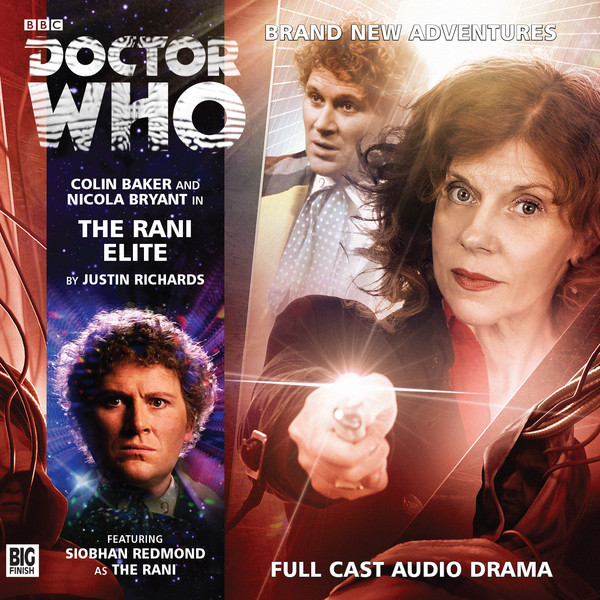 
“You wouldn’t believe it to listen to his insufferable prating but The Doctor is actually quite brilliant… such a waste.”

The TARDIS arrives at the College of Advanced Galactic Education, one of the most prestigious academic institutions in colonised space. The Doctor is summoned there to receive an honorary degree in Moral Philosophy. But as usual there’s more going on than you’d initially suspect. Someone has been up to some unusual scientific experiments. That someone is none other than the renegade Time Lord scientist the Rani – in a new incarnation. But what is she up to and how will Peri and the Doctor be able to thwart her this time?

This adventure concludes a trilogy of 6th doctor stories in the Doctor Who main range of stories for Big Finish. Rounding out the arc it finally feels like Peri and the Doctor are well and truly a team again and not a moment too soon as we get a familiar and dangerous foe with a new face. The Rani played by Siobhan Redmond was portrayed very well, and I feel that she has and will make for a very good portrayal of the role only ever played before by the singular Kate O’Mara. Knowing that it was O’Mara’s wish that the role of the Rani continue on and be recast really made it feel like this was a clever and fitting way to pay homage to the character whose brief moments in Doctor Who history have left a definite impact on so many fans of the series.

This story had everything you’d expect from a proper Sixth Doctor/Peri story. I like that the Rani’s past is clearly touched upon without delving into unnecessary backstory. I enjoy the fact that they reference this Rani has met the Seventh Doctor so we know full well this is a future Rani and not a previous incarnation. I like that this Rani’s method’s are fairly well recognizable. The Rani doesn’t strike me as a time lord who lets a regeneration alter her outlooks all that much.

I mentioned in the last review that I’ve grown quite fond of Big Finish’s Sixth Doctor. While no story is going to be perfect. (My primary criticism of this story would be that sometimes the plot twists weren’t all that surprising) I very much feel like this is the Sixth Doctor we could have eventually had if he were not essentially forced from the role so long ago. I’ve been quite excited about the release of this story from the moment I heard about it and I was quite eager to download and listen to it immediately! This was a proper Sixth Doctor story to be sure and thank goodness that Big Finish is around to serve up new Sixth Doctor stories and NOW new Rani stories!

In Summary: The Rani was in only two TV episodes, The Mark of the Rani with the Sixth Doctor and Time and the Rani with the Seventh Doctor. Current show runner Stephen Moffat has said in the past that he didn’t believe he would ever bring back classic characters like The Meddling Monk or The Rani (http://www.blastr.com/2012/08/steven_moffat_explains_wh.php) I think this story proves once again that if it’s written well there’s absolutely no reason why not, and Moffat would do well to remember that, and not assume that “No one knows who the Rani is.”
For casual fans who have never seen the Rani episodes this story does a decent job of filling us in on who the Rani is.

I think this episode will be a true joy for the folks who HAVE seen those episodes and really have been waiting a very long time for a new Rani story. It’s sad and a real shame that Kate O’Mara was unable to return to the role that she finally decided she’d like to reprise… but she gave us a rare gift by giving Big Finish her blessing to continue the Rani character so it could live on in a growing legacy. I for one deeply enjoyed this story and will eagerly await more!

I give it 4 stars, it’s maybe too sentimental and slightly predictable to get a perfect score but none of that kept me from thoroughly enjoying it.


Rating: 4
The TARDIS arrives at the College of Advanced Galactic Education, one of the most prestigious academic institutions in colonised space. The Doctor is summoned there to receive an honorary degree in Moral Philosophy. But as usual there’s more going on than you’d initially suspect.