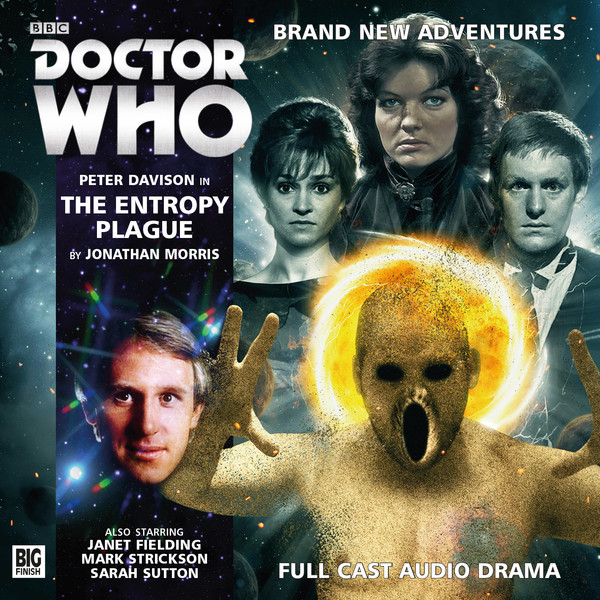 “Very well. After we were diverted into ESpace, we needed to find a way back through another CVE. But then Tegan suffered the indignity of being kidnapped by a gang of space pirates…”
Still stuck in E-Space the TARDIS and her crew arrives on the powerless planet of Apollyon in hot pursuit of space pirates who kidnapped Tegan at the end of last month’s Big Finish story Equilibrium.   There they meet the scientist Pallister who seems to have the only way out of E-Space – a strange portal. Unfortunately the portal needs power to open, and the only power Pallister can draw on is the energy contained within the molecular bonds of all living tissue. That’s right… he’s using people as batteries! To make matters worse the Entropy that is robbing the planet of power is spreading in a plague that eventually turns people into walking sandmen who spread the plague further. There is no time to waste if they ever want to return to their own Universe.

Two Big Finish reviews in a month?! You bettah believe it there buster!

This fifth doctor adventure finishes up the Big Finish E-Space trilogy. We find out immediately that much like the original E-Space trilogy in order to leave E-Space someone inevitably has to stay behind and this time is no exception.  We find this out early on in the story of The Entropy Plague because it’s told to us after the fact. The Doctor lands at their original destination after all of the adventure and proceeds to tell us the story of what happened on Apollyon, filling us in and catching us up to the present.

This isn’t my favorite story telling technique but I will admit it is used fairly well in this instance. You know right off that someone is not going to make it through this story, but you aren’t certain if they’ve died, if they’re merely separate from the group, if they were the hero that saved the day? They do let us in on it pretty quickly so we have ample time to get used to the idea that… “Yes, this is in fact happening _______ is not coming back”.

The original E-Space trilogy ended in such a trippy way and saw the departure of Romana and K-9 from the Tardis. This new E-Space trilogy was a little more straightforward (as far as the plot is concerned) and I appreciated that.

Really I think that we could see more travel in E-space and I’m not certain why the rush to get out of E-Space in 3 stories or less (aside from the fact the characters didn’t actively seek to go there and of course they want to return home).

In Summary: I enjoyed this episode I think if you enjoy a thing you are going to be disappointed to see it end, and in this case I’m in that camp, I really enjoyed the trilogy overall, this one not as much as the others but again that may have had more to do with the way the story was told out of the usual sequence. It was told well, I even think the technique was used well, I just don’t much care for that style of story. But I liked a lot of elements of this story and I’d like to hear more about E-Space and its planets so it leaves me wanting more and that’s almost never a bad sign. It’s the end of the trilogy and it serves towards that end so I wouldn’t necessarily recommend this as a jumping on point. It has some stand alone elements but a lot of what is going on was told in the previous 2 stories. Yes it still has the requisite recaps which are interwoven into the plot masterfully and not in a clunky fashion but it would be tough to follow what’s going on at first if you jumped in with this as your first Big Finish story.

I’d give it 3 stars, again good story just that retro narration story style isn’t my cup of tea… I like it to be a surprise when someone leaves the TARDIS I don’t like to be told in the first five minutes… that feels like a spoiler even if it technically isn’t (hence I continue to be vague about it in this review even if trailers have already told you what’s going to happen). Had this story just picked up right where the last story left off (and in a way it does… just not the way I’d prefer) I’d likely have less gripes and a higher overall rating for this story. But again I’m throwing a lot of my own personal biases on this month’s review. Reading Rainbow this… “don’t take my word for it…” listen to it and see if you agree, you might love it!

I still recommend it, there’s still so much I love about this month’s story and it does serve up a formidable ending to a formidable trilogy of Big finish stories. Leading into another kind of trilogy next month!

Have you heard any of these stories? Agree with Me? Disagree with me? Leave me a comment below tell me what you thought! And stay tuned for another review next month!

Rating: 3Still stuck in E-Space the TARDIS and her crew arrives on the powerless planet of Apollyon. There is no time to waste if they ever want to return to their own Universe!