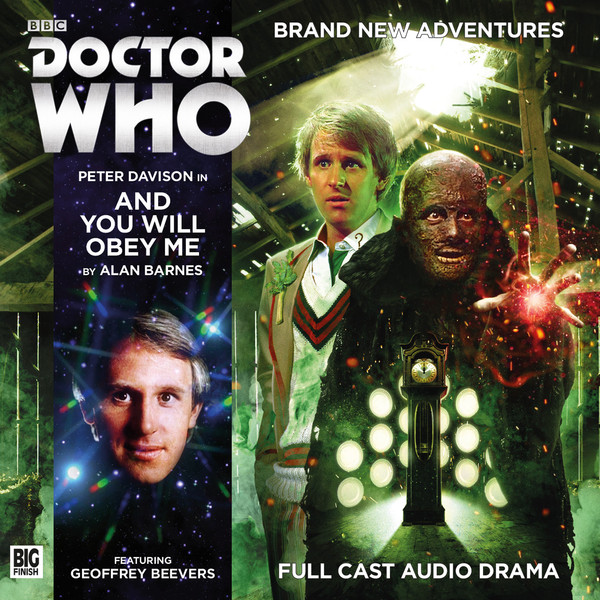 “But never fear Doctor, I have no intention of retaining this cadaverous form, not when your body’s mine for the taking.”

Ageless Teens from the 80’s, 8’ Dragonflies, and of course… The Master! This Month’s Main Range Doctor Who offering kicks off a series of Big Finish stories celebrating the 45 year anniversary of The Master!According to the Big Finish Solicit:

“The Master: wanted for crimes without number, across five galaxies.

The Master: dead and buried in an unmourned grave, in a lonely churchyard.

You had me at the title and Geoffrey Beevers. The Master is one of my absolute favorite Doctor Who villains. When the series returned I was shocked and appalled that it took 3 seasons before I got a new series Master.

But Back to Geoffrey Beevers, when I returned to Doctor Who after a long hiatus from watching as a child I distinctly remembered the Master. One episode though stood out in my mind more than any other… The Keeper of Trakken. That statue of Melkur was etched in my memory as was the haunting visage and voice of The Master, who at that time was played by Geoffrey Beevers.

This story obviously takes place before Trakken but features the 5th Doctor. It also features the Master’s TARDIS as a strong focal point for the opening and ultimately the climax of the story.

Okay I admit to a gigantic amount of bias here… I’d listen to a whole series where the Master is the Hero and the Doctor is the foil but this had some very clever set ups. I like how it ultimately will tie into the TV series and yet potentially set up some of the stories from Big Finish in the months to come.

We’ve seen so many versions of the Master by now that sometimes it’s hard to envision a new plot for the Master or a new low that he might stoop to. This script did a nice job of answering both of those questions… he does indeed have a new plot and he is still as dangerous as ever willing to stoop to terrible acts in order to get what he wants and to aid in his survival efforts. A fun and creepy tale of the master and a worthy set up for more to come. 5 out of 5 Grandfather Clock TARDIS’s

The master is yet again trying to steal himself a new lease on life. What’s your favorite of his plots to extend his lives or steal regenerations?  If you have one I’d love to hear it, let me know in the comments below or by shooting us a message to letters(at)grawlixpodcast.com.

The Grawlix Podcast #4: Time and Punishment