Being a longtime fan of The X-Files, I am always interested when anything new comes around to jump back into the mythos of the show and the lives of Mulder and Scully (Especially after the disaster that was the 2008 film The X-Files: I Want to Believe). So I was more than happy to pick up this comic and see that it picks up right where the original series left off and deliver a solid and interesting first issue.

Writer Joe Harris inserts the reader back into the lives of Mulder and Scully, who have retired from the FBI and are living together, trying their best to lead something resembling normal lives. Scully is putting her skills to use as a practicing doctor while Mulder seems to be doing his best not to let boredom take over his life.

Of course, nothing is ever simple or easy for Mulder and Scully and that is pretty much what you would expect from The X-Files. Things go from mundane to chaotic in no time and it’s all done in such a way that makes the fan boy inside of me grin from ear to ear.

The issue jumps right in with some creepy visuals and the artwork done by Michael Walsh seems very familiar and welcome, like visiting some old friends for the first time in years and happy to see not much has changed. The look and feel of the whole issue is well done with Walsh nailing the atmosphere of The X-Files with his stellar art while keeping it simple in regards to the paneling, with no confusing crossovers or over the top pieces.

I was also happy to see Harris give us a story that was more like a standalone episode then part of the alien mythology that was such a big part of the television show. While it still might make an appearance, it didn’t seem right to slide back into the whole conspiracy angle without re-acquainting ourselves with Mulder and Scully first. Also, this is a big plus for those new fans that are just discovering The X-Files as they can read this issue without becoming totally lost in the huge back story and in jokes.

With crisp writing (check out Mulder’s chat with the neighborhood kids, its spot on) and wonderful visuals, there was not much about his issue that I could complain about, expect that fact that it was such a smooth and seamless read it was over too quick.

For dedicated X-Files fans like me and for those first discovering this great show, this is a great first issue and I highly recommend you pick it up for your reading pleasure.

REVIEW – Doctor Who: The Rani Elite 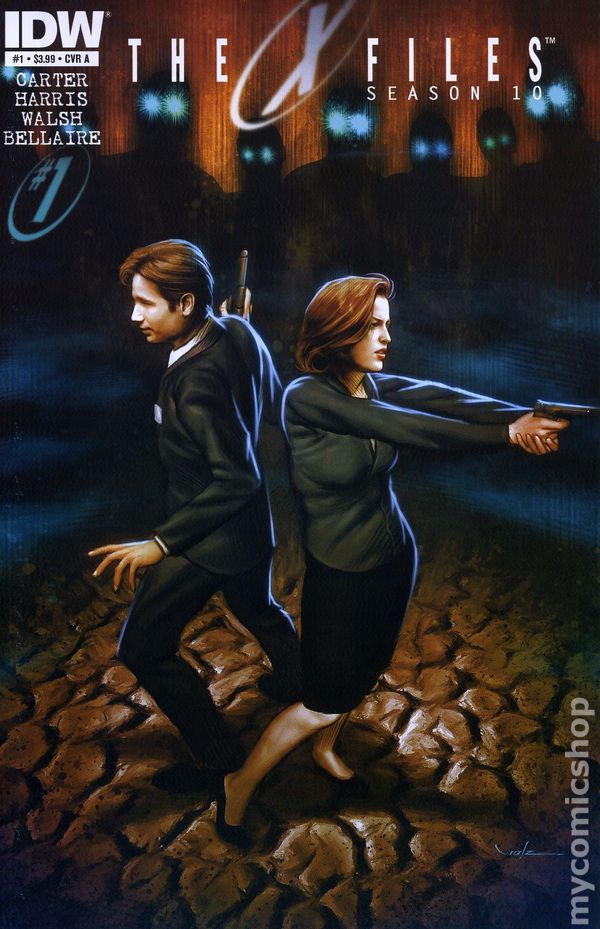 The X-Files Season 10 #1
Publisher: IDW Publishing
Available From: mycomicshop.com
Disclosure: The above link is an affiliate link. If you click through and make a purchase we may earn a commission at no additional cost to you.
Cover by Carlos Valenzuela (W) Joe Harris (A) Michael Walsh For years they investigated the paranormal, pursued the 'monsters of the week,' and sought the truth behind extraterrestrial activity, along with the grand conspiracy surrounding it rooted deep within their own government. But when AGENTS MULDER and SCULLY reunite for a new, ongoing series that ushers THE X-FILES into a new era of technological paranoia, multinational concerns and otherworldly threats, it'll take more than a desire 'to believe' to make it out alive. The X-Files: Season 10 also sees creator Chris Carter return to the fold as Executive Producer!