Doctor Who: The Diary of River Song Series One 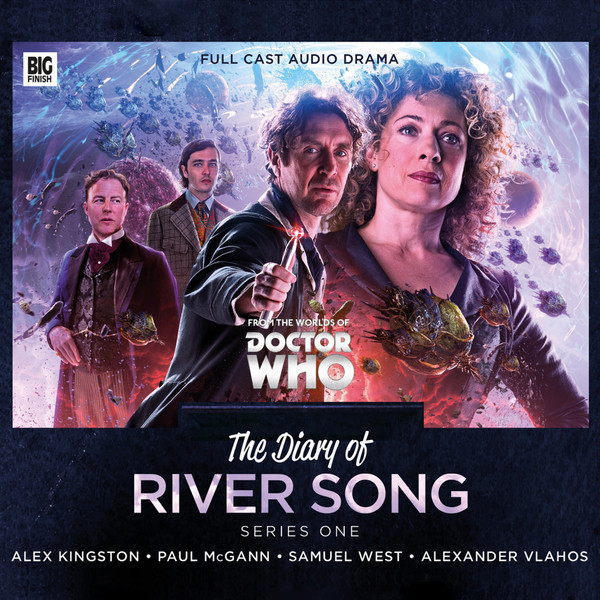 Doctor Who: The Diary of River Song Series One

If you listened to episode #24 of our podcast then you know… River Song isn’t always for me. That being said I did wonder how in the world they would start tying her in with the classic Doctors. While I knew she’s on her way into the Doom Coalition 2 storyline… when they dropped The Diary of River Song Vol 1. early in advance of this year’s Christmas special I was sufficiently intrigued and quite compelled to give it a shot.

“River Song has had more than enough excitement for a while. Deciding the universe – and her husband – can look after themselves, she has immersed herself in early 20th century academia, absorbed in writing archaeological theses.

But when a mysterious tomb is found in a dry, distant land, excitement comes looking for River.

Can Professor Song stop any more members of the expedition from dying? What deadly secrets lie buried within the crypt? And will British Consul Bertie Potts prove to be a help, or a hindrance?”

This one was a rough start for me… and I think that’s just my personal bias showing through. When it comes to my Doctor Who archaeologists… make mine Bernice Summerfield. Don’t get me wrong… This was a great place to start and all but this isn’t my favorite role for River Song. When I think of her I don’t think of her lying low and hiding away in some university keeping to herself neither do I like to think of her as a gender swapped Indiana Jones, I prefer that she is her own unpredictable self.

I think the story as a whole was compelling enough and it did what the opening act is supposed to do but I wasn’t overly invested in it. There were some fun nods to things we’d see in the televised Christmas special like the “Sonic Trowel.” What we get is a perfectly acceptable opening story which many are going to like just fine but it just didn’t overly “wow” me so take my 3 /5 for this disc with a grain of salt because the stories got much more interesting to me as this set cruised along. My misgivings aside the tone was set and the quality of the production was very high.

1.2 I Went to a Marvelous Party by Justin Richards

“River Song always enjoys a good party, even when she’s not entirely sure where or when the party is taking place. But the party she ends up at is one where not everything – or indeed everyone – is what it seems…

River is confident she can find the killer. But can she identify them before anyone else – or quite possibly everyone else – gets killed?”

Okay now THIS is what I think of when we see River… a whodunnit during a dinner party. I don’t know why but I was much more comfortable with this story than I was with the first, it’s kind of formulaic in that it plays into what we know and think about River but you know what?… for her first ever Box Set? I’m really kinda okay with them treading some familiar ground when setting the stage for a new series. The end of this story perfectly sets up the third story with a fun cliffhanger so while this isn’t the most memorable part of the set it, for me, was a better start for the actual arc that the box set was ultimately taking us on. 3.5/5

“River Song is on the trail of the mysterious, planet-killing SporeShips.

Nobody knows where they come from. Nobody knows why they are here. All they do know is that wherever the Spore Ships appear, whole civilizations are reduced to mulch.

But River has help. Her companion is a handsome time-travelling stranger, someone with specialist knowledge of the oddities and dangers the universe has to offer. For Mr Song has a connection to River’s future, and he would never want his wife to face those perils alone…”

This story is why I do not regret picking up this set. In fact… this may be my new favorite River Song story.

It’s a wonderful little two hander of a story where it’s just River and her… husband? You’d think that maybe that constant back and forth of conversation between them would get a bit old but the characterizations and the way it was produced really made this one a joy to listen to.

We get to hear River simultaneously get the relationship she’s always dreamt of while realizing that maybe what we see is not what we actually get.  All the while River is slowly dying and we start to wonder how she is going to get out of this one.

1.4 The Rulers of the Universe by Matt Fitton

“As shocking secrets are exposed, and a grand plan for the universe is revealed, River decides it’s time she took control of events once and for all.

Out in deep space, a clandestine society faces off with an ancient and powerful alien force – but, for River, there’s an added complication.

The Eighth Doctor has been caught in the middle, and she must make sure her future husband can arrive at his own destiny with all his memories – not to mention his lives – intact…”

Again this was the reason I was so intrigued by the set because this is the set where River and the 8th Doctor cross paths. It was good, and Matt Fitton again spins a great 8th doctor tale so it stood to reason that he’d be the perfect person to pen the River’s first interaction with the Classic Docs. I didn’t really have any doubt because the folks at Big Finish are very clever but I did indeed think it was handled very well. The Doctor seems to have a smidge of a hint that something is up with River but just rolls with it. I’m beginning to think that “Eight” is the Lando Calrissian of the Doctor’s regenerations because… that cat is just plain smooth.  4/5.

Despite my rocky start on this set it was a fun entry for River into the Big Finish universe. It’s crazy to think that Steven Moffat hoarded this character for so long as the only person to write stories for her. The fact he is now loosening his hold on her and allowing new stories to be told just goes to show the great amount of respect that he must have for the Big Finish crew and I don’t think his trust was unfounded at all. In fact, despite my lackluster feelings towards the character I still have to give this set a clear 4 out of 5 Stars because it’s just handled so well. River Fans you won’t be disappointed, and for those of us who are a little more ambivalent? There’s still an awful lot there for us to like too.

Were you looking forward to this set? The table is set for Doom Coalition 2 and the inevitable Diary Vol 2. Are you excited to get new River Song stories or do you wish they’d let her exit stage left gracefully? You can let me know in the comments below or please shoot us an e-mail to letters(at)grawlixpodcast.com.

Torchwood: Made You Look (Review)