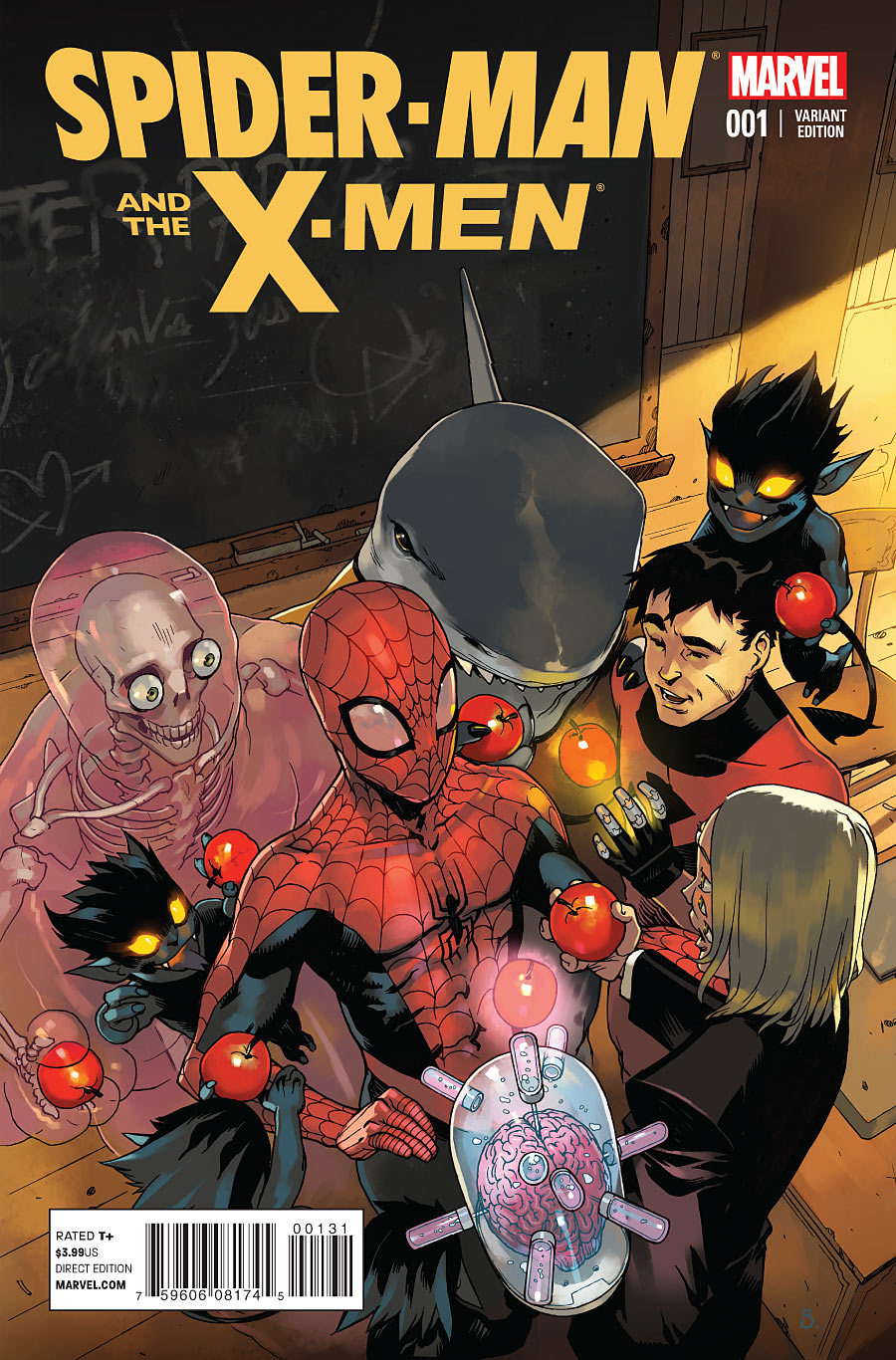 As a full time teacher sometimes it gets hard for me to stay current on comics. In fact at some points in the year it’s down right impossible for me to stay on top of just the comics I WANT to read (i.e. the books I personally put on my pull list and buy). So inevitably I wind up with a backlog. Then the summer break hits and I have to make some hard decisions. Will I dive into that backlog and salvage some stories? Or will I purge them unread as sacrifices to the Garage Sale gods? Well this year it’s been very hard to give up my books without a fight so I found myself jumping into books I might normally let go. Spider-man and the X-men is one such book.

It was on my radar when it was coming out for monthly release but only just barely. It looked interesting and Spidey crossovers with the X-men have always been pretty fun in the past so really this was a nostalgia purchase. I wasn’t sure this would be worth the coin but I wanted to give it a shot anyhow.

Okay! So let’s back up, shall we?… this has been on the backlog for awhile so when does this take place? This series happens pre-Secret Wars but post Avengers vs. X-men and post the death of Wolverine. In fact I didn’t realize it at the time but apparently this book was Marvel’s answer for how to proceed with the Wolverine and the X-men title when the title character was now dead.

Here’s a wikipedia synopsis (because those are NEVER wrong):

“Following the death of Wolverine, Spider-Man becomes a faculty member at the Jean Grey School for Higher Learning and tries to teach ethics to troubled students Eye-Boy, No-Girl, Rockslide, Shark-Girl, Hellion, Ernst, and Glob Herman. At the same time, he secretly investigates the students because Wolverine asked him to locate a traitor.” (FYI do NOT look up this wiki synopsis because if you keep reading it will reveal the end of the whole plot… i.e. WHO THE MOLE IS!)

Now I only read the first 4 issues of this because I apparently noticed that I wasn’t reading this book and took it off of my pull list so I’m missing 2 issues out of the run which they are calling a… “limited series”? Uh… any idea what that is? Is that like a series that got cancelled before they thought? Cuz most “mini series” last about 6 issues…. I digress. The question then becomes: “Did I enjoy this enough to find the last two and finish the run?” Let’s find out!

So Wolvie had a mole and he wanted Spidey to be an outside set of eyes. This is kind of a clunky premise as spidey just got over being dead himself and his own books were dealing with how Parker is reclaiming his life after Doc Ock had been living it. At least this book addresses that fact and keeps it moving. Clunky or not, it was entertaining. The tired mashing up of X-men and Spider-man rogue galleries got a little predictable though. In this limited run you basically get 3-4 mini story arcs wherein one spidey villain gets mixed with one x-men villain and that wacky Peter Parker (despite his best intentions) can’t catch a break.

Some things I don’t get about this run…

The X-men don’t like Spidey. Huh? I mean I get that the X-men have problems of their own but… their mission specifically at the Jean Grey School had been peaceful coexistence with non-mutants and yet everyone from headmistress Storm to Beast to even former “amazing friend” Iceman are lukewarm to Spidey at best. My feelings on this range from confusion to disbelief. While it made for some funny situations it seemed off. Spidey has a history with the X-men maybe they are all still mad from Avengers vs. X-men? I don’t know, it seemed strange.

Spidey is an awkward teacher. Okay I know “Brand New Day” rebooted a lot… but apparently Spider-man doesn’t know how to teach anymore? He was specifically a High School teacher for awhile in his own books… THAT was his job! High School teacher in NYC! He could handle a small class of students powers or not. I guess knowing stuff about Spider-man is… not as useful towards the enjoyment of this book… don’t think too hard.

I read all of the books I had. I’m actually AM disappointed that I don’t have the last 2 and I really might track em down just to finish off the set. The premise might be a little ham fisted but I think it’s the injection of fun that the X-men franchise desperately needed after the death of Professor X only to be followed by the death of Wolvie. Man! Can the X-men stop dying for awhile? I don’t know if that was always the plan or not but “find the mole” lends itself to a short run or “limited” run. Once you figure out who the mole is it’s probably time for the series to be over but I kind of liked professor Spidey and could stand to see him in an X-book for awhile.

There are some classic panels of Spidey one liners that have even gone viral. I’ve seen the panel of Spidey arguing with Sauron on social media more than once as it’s on imgur ready for sharing. It’s a light read. It’s imperfect but fun. Even though folks bust on this book for focusing on the D-listers that actually gave me a reason to even care about the D-listers. I don’t recommend this book unless you are a pretty big Spidey fan or unless you liked the young crew of X-men but if you fit either of those molds then I think you’ll get a kick out of this book. I’d say give it a skim if you are bored or if you have the Marvel Unlimited Service it’d be worth a quick read. It’s only 6 issues after all.