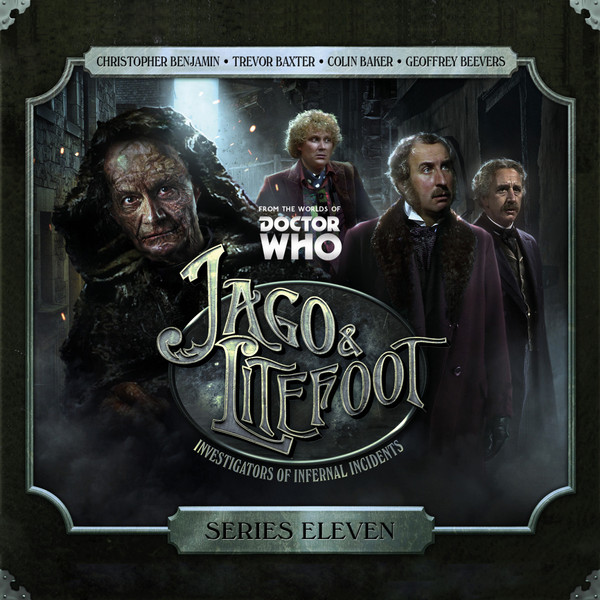 “Bring my cloak and mask the air is cold tonight… I’m visiting friends, their names are Jago and Litefoot.” -The Master

45 years of the Master and in the worlds of Big Finish Doctor Who he is celebrating in style! This 11th series of Jago and Litefoot sees the dynamic Victorian era duo up against The Master in the form of Geoffrey Beevers (arguably one of the creepiest forms he’s ever held and that includes the goo snake! THAT VOICE!)

Okay full disclosure time, I have heard several Big Finish stories that involve Jago and Litefoot but up to this point the Jago & Litefoot stories I’ve listened to have been like the recent Jago & Litefoot and Strax one off story or tales which were part of some sort of crossover like The Worlds of Doctor Who or as part of a Doctor Who story such as The Last Adventure of the Sixth Doctor. I have long hoped to jump in on this series from the beginning but have not given myself proper occasion to start.  Well when I noted that this set was including the Master AND the Sixth Doctor my hand was forced. I am far too big a fan of all of these characters to miss it. Would I be utterly lost starting at series 11? Or would this set be as delightful and as standalone as the tales I’ve previously enjoyed? Let’s find out shall we?

1. Jago and Son by Nigel Fairs

With missing persons, dead bodies and a Satanist cult to deal with, both Litefoot and Jago need help. Professor Litefoot finds himself working with Jean Bazemore, an old archaeologist friend. Jago, however, finds he is assisted by someone he never even knew existed – his own son. Or is he? Can Jago be sure of anything?

But there is more to events than the detectives know. An alien menace is stirring underground. Once again, Jago and Litefoot find themselves fighting for their lives…

Creepy and full of intrigue  this story was quite a fun set-up. It started with that classic trope of a young man arriving quite unannounced stating “Jago… You are my father!” and of course it’s uncertain throughout whether the young man is or isn’t. All the while we know the Master is involved somewhere and we wonder… where is he and what is he up to now? This story had a lot of fun side characters like Jean Bazemore which caused us to ask ourselves what else is there to know about our title characters that we are as of yet unaware?! Is Jago the type to have a son out of wedlock? Is there a romantic interest in Litefoot’s life? These are questions I’m not sure I ever thought to ask, but I definitely enjoyed the challenge.  While all of this subplot is happening for each character a looming threat pulls them from scene to scene and brings it all together. 4.5/5

As he tightens his grip on Inspector Quick, the Master becomes interested in the young composer Maurice Ravel. For his part, Ravel befriends Professor Litefoot. But is anyone truly who they seem or able to control their own destiny and actions?

When Litefoot goes missing, it’s up to Jago to investigate. But the Professor finds himself in a nightmare landscape where reality and fiction seem to have merged. Will he ever manage to escape? And if the real Maurice Ravel is trapped with Litefoot, who exactly is walking the streets of London?

This one was quite strange but not strange in a bad way in fact quite the contrary. This story was the kind of strange that keeps you puzzling whether you have figured out what the plot is but it just keeps twisting so it keeps us guessing the whole time. This scheme has the master’s fingerprints more clearly present throughout  but it’s still not quite clear what he’s after. Things start to become more clear towards the end of this tale as the Master’s sights are slowly set more directly in the direction of Jago and Litefoot. This one gets a bit confusing at times but the payoffs are very much worth it. As the Master closes in I feel genuine fear for our heroes… how can they possibly face the threat of a foe such as the Master? 4.5/5

3. The Woman in White by Simon Barnard and Paul Morris

The great actor Henry Irving is not as great as he once was. In fact, he’s awful – a shadow of his former self. Worried that something may be terribly wrong, Irving’s assistant Bram Stoker enlists the help of an old friend – Henry Gordon Jago.

With Irving’s state deteriorating, Professor Litefoot also faces a challenge. He performs an autopsy on a man who has had all his bodily fluids drained from him. Can the detectives discover the connection between the great actor and the mysterious dehydrated corpse? And how does it relate to the Woman in White who supposedly haunts Irving’s theatre?

Some very fun easter eggs in this story complete with a nod to The Talons of Weng Chiang but much of the fun centers around the famed Bram Stoker who you can tell very early on will be basing his most popular works of fiction on the events that unfold. I love these kinds of stories where the art or fiction of the past is seen through another lens. The Master is very coy in this one, keeping very much to the shadows but that seems to allows the Master’s plot to thicken as something otherworldly is revealed. 5/5

The Master’s plan is nearing completion – and he is sure that Jago and Litefoot will help him bring it to fruition. With Inspector Quick increasingly under the Master’s influence, the Infernal Investigators find themselves tired and fatigued, as if their very life force is being drained away…

With the help of Ellie together with stage hypnotist Madame Sosostris and her assistant Mr Nocturne, Jago and Litefoot finally track down the Master. But as they make their way towards his lair, the Time Lord’s true scheme is revealed.

It took us 3 discs to get here but finally we get to the final part. All of the pieces find their places on the board and the Master faces Jago and Litefoot; also we finally get to see where the Doctor ties into all of this. This story takes its time slowly plodding towards the final confrontation but does so for a reason and it is all revealed to us in the end.

It is in this story where my novice experience with the Jago & Litefoot range brought me a bit of confusion. I knew that the Sixth Doctor had encountered the duo a number of times but I guess I was uncertain of how and when, this story references events that occurred in the 4th Series of Jago and Litefoot, it’s not so confusing as to ruin it for me but it did give me pause. The Doctor is very incognito in his approach at first and I didn’t quite understand why. Upon further research I found they were nodding back at that encounter in series 4 which I simply did not get.

I think that this box set flirted with expectations a bit. When we think of the Master we often have a certain type of story in mind and while this set does deliver the familiar it was done in a new way, a way that was familiar for fans of the Master and yet remained familiar for fans of Jago and Litefoot. I love that when they all meet the Master, as formidable as he is, can not underestimate the infernal investigators because they are more than up to the task of frustrating a time lord as calculating and premeditated as the Master.

This was a very satisfying conclusion. 5/5

The plot held many surprises and kept me guessing but what didn’t surprise me in the least was just how excellent this set would be. 4 discs of story and every minute was a wonder. If you aren’t well versed in the worlds of Jago & Litefoot I recommend  that you go back and enjoy a little more before jumping straight to this release. That being said, I think this set stands on its own very well. The one time I was confused was not detrimental to the story, I merely knew there was something I was missing out on. I enthusiastically give this set 5 out of 5 stars and although it may be my first “pure” Jago and Litefoot Box Set purchase I assure you it will not be my last.

Jago and Litefoot started as a companion chronicles story (in Big Finish) and they just continued to branch out from there. They pop up in Doctor Who special releases and other Doctor Who range stories (such as my favorite 4th Doctor range story… The Justice of Jalxar) I love that the Sixth Doctor is pals with these gents even though they were introduced in a 4th Doctor television adventure. What other spin offs or crossovers would you like to see Big Finish attempt? Let me know what you think in the comments below or by shooting us a message to letters(at)grawlixpodcast.com.

Doctor Who: The Secret History Review

Doctor Who Returns To Comics In Two New Series!