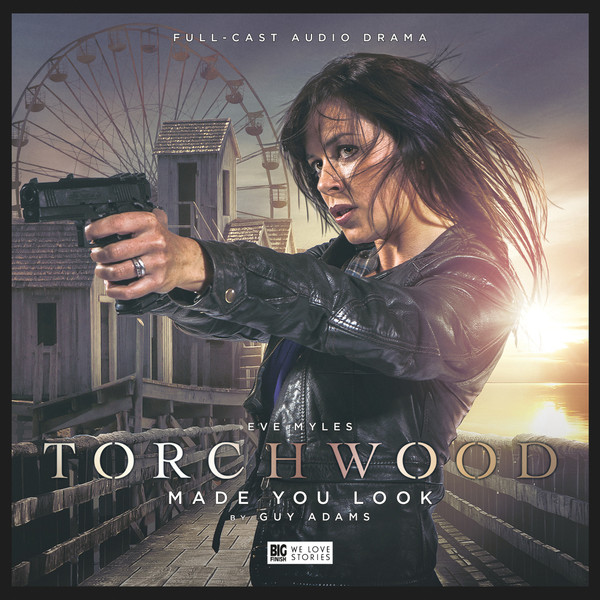 “Ugh, Come on, there must be someone in this town…. HELLO!… Fine! Keep your crappy space invaders.”

Big Finish concludes another incredible season of Torchwood by bringing back our first lady of Torchwood Eve Myles.

“It stalks you. It whispers. It wants you to turn around. It wants you to look. But if you do… If you see it…”
Talmouth is a lonely seaside town. No-one has heard from it for days. No-one who goes in comes out. Something has happened to Talmouth. Has it been taken over by aliens? Or is it something far, far worse?
Gwen Cooper’s come to Talmouth to find out. What’s happened has to be seen to be believed. But by the time you’ve seen it, you’re already dead.”

When internet rumors started circulating that Eve Myles was done with the character of Gwen Cooper it didn’t look good for fans of Torchwood. Apparently she was either trolling people or she changed her mind either way it made for a pleasant surprise that she would indeed be the spotlight character for the second series ender (as well as the announcement of her involvement in Torchwood: Outbreak coming in November) thus making two series now that have started with Jack Harkness and have ended with Gwen Cooper. (Which is a formula I’d be just fine with them continuing.)

Made You Look had a tough act to follow in Broken from last month but with Guy Adams at the writing desk it was in entirely capable hands. Moving Target was one of the biggest surprises of this series for me being the Torchwood story I never knew I needed. More Than This was also penned by Guy Adams and was an incredible way to end series 1. Well he’s already proven he has the chops to end a proper series of Torchwood, and Eve Myles has more than proven she can hold her own in this audio format. Never is that truer than when she is set in a solo story like this.

Series two has been quite varied and has offered wonderful tales spanning a lot of the different sides of Torchwood, here we get a proper Torchwood thriller.

Gwen doesn’t strike you as the type to get scared easily anymore so when she does gets worried, the audience gets worried right alongside her. Also the Gwen Cooper stories in these Big Finish ranges tend to be breaking new ground in the future of Torchwood so there’s no surefire safety for her or her new Torchwood team it’s anyone’s guess what will happen as Matthew Gravelle serves us up a creepy threat worthy of the Name “Darkness”.

I feel like I’m always saying “insert awesome element here” is what Big Finish does best but this month for real… it’s all done with audio. The tension and suspense is all built in audio which kind of seems like a no brainer but it’s true. This is not one you’d want to listen to on a foggy night, and yet it’s a brilliant story to listen to in a bright well lit room.
It’s bittersweet that after a full year of monthly Torchwood stories we will have to wait till November for a new tale. However if they must leave us at least they leave us wanting more Which is a good problem to have. This story gets a hearty 4.5 out of 5 stars.

Were you as worried as I was that we had heard the last of Gwen Cooper? The only other character I can think of that might not offer us new stories due to the actor portraying them is Christopher Eccleston’s Ninth Doctor… is there another character I’m missing? And who do you wish would come back and play their character again for Big Finish or otherwise?  Let me know in the comments below or by shooting me a tweet! @jessekiefer I want to hear from YOU!