What? Every tenth episode of GCU we are going to look back on the previous nine episodes. Which double feature was our favorite? Which was YOUR favorite? If we could mix-and-match movies from different episodes which would we pair up? Most importantly, what if we could use any of them… or ALL OF THEM in a massive Extended Cinematic Universe? Full list of movies below.

We want your help!

We want to hear your mash-up pitch using any or all of the movies listed below! Send us a message or voice recording of your pitches and we’ll include them on GCU #10!

Don’t forget to vote on your favorite double features here in our Facebook Group! 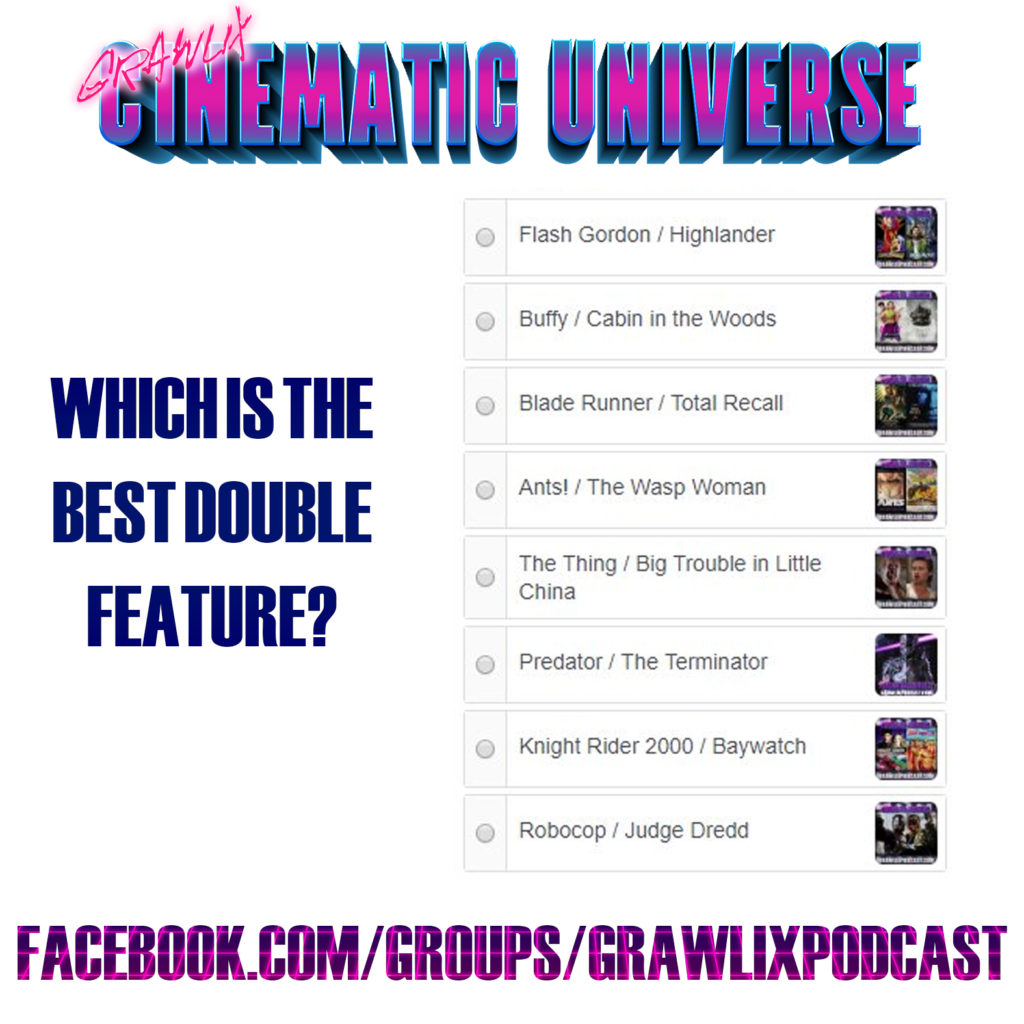 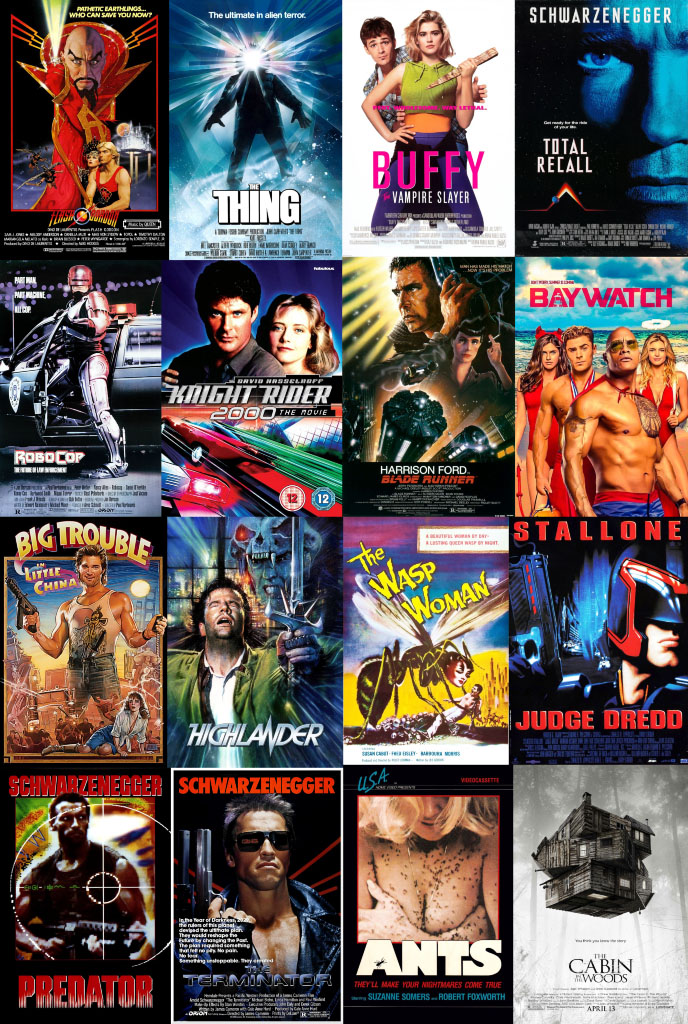 We watched 16 movies this season. Some were great and some were Ants! Here is a breakdown of which we liked the most and which caused us to zone out and start paying more attention to the people talking to us on Xbox Live.

We covered a lot of true cinema classics this season including some iconic sci-fi movies. Randy duled out three 5 star movies. The highest rating Jasper gave out was a 4 and a half. With that in mind…

On the other side of the spectrum the lowest single rating given out was a ZERO star from Jasper for Ants! The lowest rating from Randy was 1 star for the very first movie we watched on GCU, Knight Rider 2000. Imagine that, the made-for-TV movies striking out.

Ants! aka It Happened at Lakewood Manor is, unsurprisingly, the lowest rated movie of the season. Even Grawlix Podcast’s own Jesse, who was a guest on that episode, couldn’t save Ants! with his extra 2 star rating. With Randy’s 1.5 star rating and Jasper’s goose egg, well, you could say it got a one-point-not-gold rating.

There were not many wild disparities in the ratings (unless you count Jasper NOT giving The Thing a perfect 5 stars… insane) but there was one movie we both agreed on exactly… The Cabin in the Woods. 4 stars. 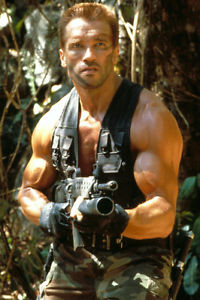 Arnie showed up as the lead in 3 movies, Kurt Russell in two  and ol’ Sly only appeared once. Will any of these no-names show back up in the Grawlix Cinematic Universe? I image they will. What about those unexpected recurring appearances?

Max Von Sydow surprised us as the the villainous Ming in Flash Gordon then again as the good-guy mentor in Judge Dredd. We also had a double shot of a villainous Rutger Hauer in both Blade Runner and Buffy the Vampire Slayer. James Hong doubled up on us and we almost missed it. He was the big trouble of Big Trouble in Little China and Hannibal Chew in Blade Runner. Man, they like to put old man makeup on that guy! Sidenote, check out his filmography sometime. That dude WORKS.  Of course, we can’t forget the Hoff. You can guess in which movies he appeared.

There are several more but those are the actors that jumped out at us. Usually in over the top ways.

Already we’ve come across some odd yet persistent movie tropes.  Some of them are ridiculous and some of them wore out their welcome long ago. Here are a few that we just can’t seem to let go.

2 Damsel In Distress Forcibly Wed to Wizard – Yeah, we didn’t expect that one to come up TWICE. Big Trouble has 2 women in this predicament so technically, with Flash Gordon, that would be 3 damsels to be forcibly wed. There were other women in peril but this odd wizard trope really threw us.

3 Unnecessary Backflippers – We get it. It’s a movie and movies want to be flashy but is unnecessarily backflipping all over the place the most efficient thing to do when in a fight? Blade Runner tells us no, no it isn’t.

2 Hanging From High Things Climaxes – If we wanted to lump in the general threat of great heights at least 8 of these movies fall into that category. Pun intended! Also, HALF!? However, this is specifically hanging from high places as the climax of the movie. The Wasp Woman almost fits as a fall out of a building vanquishes the antagonist during the climax. Robocop as well. No, we are after a tension filled, dangling from the fingertips final climax sequence.

For you number nerds here are some box office figures for the theatrically released movies covered in Season 1. All based on US data NOT adjusted for inflation.

You may have noticed we have not included any of the movies (and TV shows) mentioned in GCU #3. Hey, that was an alternate universe Grawlix Cinematic Universe. It’s not canon. We do want to once again thank the Neil and Johnny and AM Audio Media guys for putting that together. And Vinny, I spose. It was awesome hearing our premise spun with their special brand of delivery.

GCU #10: Grawlix Extended Cinematic Universe will be out August 13th. We look forward to hearing everyone’s favorite pairings and any pitches that come our way. We are also excited for the next batch of movies coming up in Season 2! We have a crazy list of double features not to mention a great lineup of horror movies for October. This then… Credits.

GCU #14: Alien vs Predator vs Freddy vs Jason

GCU #34: Leprechaun vs Jason In Space