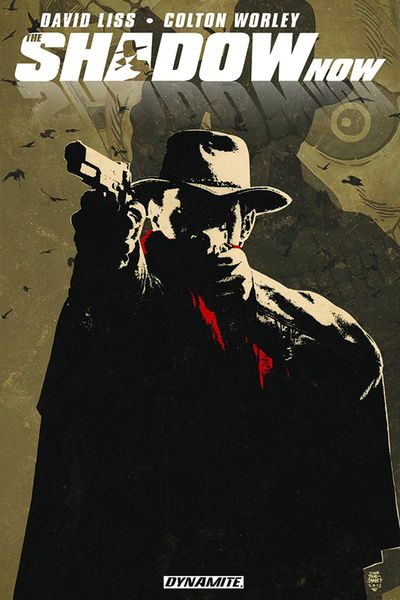 Available from Things From Another World

“The pundits call it terrorism, but there’s no political agenda here. I call it something else. I call it crime. And that makes it my business.”

[Disclaimer: I received a copy of this book through Netgalley in exchange for an honest review.]

Lamont Cranston is The Shadow, a hard boiled vigilante with the ability to cloud men’s minds and see into the hearts of evil-doers. If he doesn’t like what he sees there he will put you down with two fists full of hot lead. Old school. REAL old school. The Shadow has been cleaning up crime in all manner of media since the 1930s. Radio dramas, pulp novels, comic books, comic strips… you name it. Jump to The Shadow Now, written by David Liss (Black Panther: The Man Without Fear, The Spider) with art by Colton Worley (Miss Fury, Jennifer Blood, The Spider).The Shadow is back in modern day New York after spending the last several decades rejuvenating himself in the east. His privately funded secret agency “Shadow Network” has been operating in his absence. Cranston is ready to resume his old life and take to the streets as The Shadow. However, a brief visit to his incarcerated long time archenemy, Shiwan Khan, sets in motion a plot that will unravel the entire Shadow Network and put The Shadow on the run.

Writer David Liss hits the concept right on the nose. It is a pulp story where the good guy packs a pistol in each hand with plenty of mobsters on the streets to provide cannon fodder. At the same time the fish out of water aspect of The Shadow returning to a modern day setting after being out of commission “for decades” makes for some fun without being hammered to death. In fact, the “old meets new” theme presents itself in interesting and organic ways throughout the story. [MINOR SPOILER] Villainous Khan tracks down his closest living relative to aid in the “family business”. Naturally, that relative happens to be a teenage girl with a seriously bad disposition providing further exploration of the theme with a father/daughter generation gap relationship.[SPOILER END]

This isn’t a story about an unstoppable superhero swinging back into town to retake his place as number one crime fighter though. Despite appearing young yet being old enough to find all his former colleagues replaced by their grandchildren The Shadow is not invincible. Liss makes The Shadow as vulnerable as the next guy and if his mind clouding ability is impaired he is in real trouble.

Luckily for ol’ Cranston he falls into company with the granddaughter of an old flame who is pretty handy with a pistol herself. The old timers, Cranston and Khan, are swiftly reminded that these are not the old days of damsels in distress either. Each find themselves working with female counterparts that are just as strong, capable, and in some cases, ruthless.

The story drags slightly while Cranston is on the run but once the real conflict begins it is quite intriguing. Liss shows that The Shadow is more than just a gun toting mystic putting the pain to street thugs (he is that, too, of course) but also a strategist able to spin a devious plot of his own. This is where the writing really shines. The pulp influences are brought to the forefront. The Shadow, Khan, and a whole bunch of gangsters all entangled in a game of manipulation. There is just a touch of fantasy and science fiction on the edges but that rarely bleeds too far into the core of this crime story.

For me, the biggest problem with this book is the art. It is digitally painted by Colton Worley and while some of the imagery of The Shadow himself is very striking the book as a whole has an unappealing look. It appears as though Worley may have worked from photographs which is not a technique that I have a problem with per se but in many areas here it is reminiscent of images with Photoshop filters applied. I am NOT saying I believe that is what the artist did. I am saying that the digital painting hits levels of photo-realism that it is unappealing. Perhaps it is the uncanny valley effect at play or perhaps it is just an aesthetic that doesn’t work for me. Either way, it took away from the reading experience.

That being said, there are several very nicely rendered panels and pages. The color palette fits the tone and theme of the book with a lot of dark settings mixed with the occasional bold red splash of The Shadow’s scarf. In fact, the most bothersome panels in terms of hyper-realism are daylight and brightly lit scenes. When The Shadow is out in costume to bring justice to some dirt bags Worley presents very dynamic and stylized layouts and The Shadow himself is almost always expertly depicted.

The art style and a slightly slow start to the story are the downsides of The Shadow Now. This is an otherwise entertaining modern take on a classic pulp icon. Even rocketing The Shadow forward to modern day New York it still holds true to its crime story roots, maintaining a dark and gritty atmosphere all it’s own. Once the plot had me, it was a page turner right till the end with a climax that did not disappoint.

Doctor Who: Last of the Cybermen Review

The Shadow Now
Publisher: Dynamite
Available From: Things From Another World
Disclosure: The above link is an affiliate link. If you click through and make a purchase we may earn a commission at no additional cost to you.
Cover: Tim Bradstreet Writer: David Liss Art: Colton Worley Having spent decades in the east to rejuvenate himself, the greatest pulp hero of them all, The Shadow, returns to New York in modern times. Lamont Cranston seeks to resume his old life, and his heroic alter-ego is ready to stand once more as an enemy to evil. But while he slept, his foes have remained vigilant, and the most dangerous man that The Shadow has ever faced prepares to rise once more... with his wicked progeny by his side! It's the shocking beginning to a new era for the Shadow!