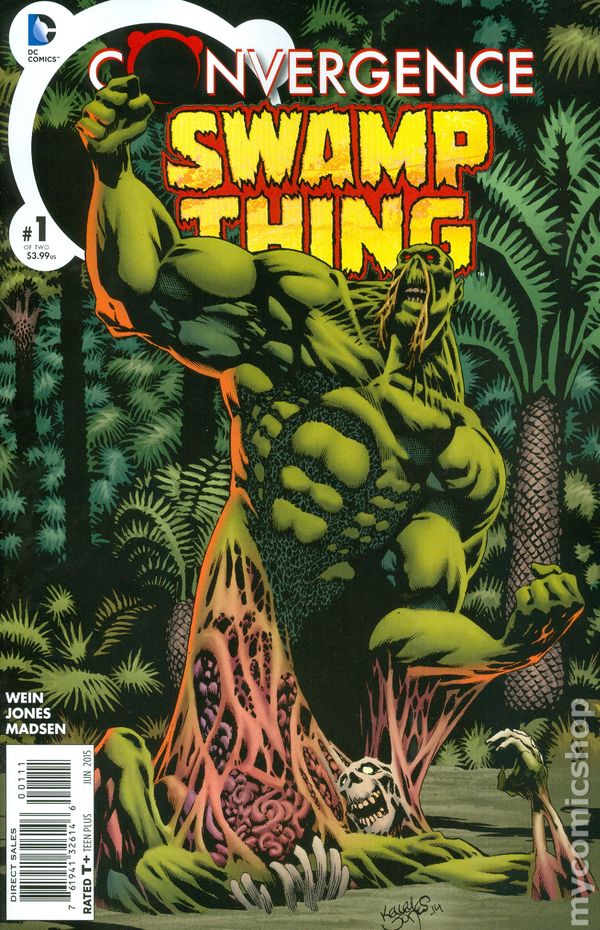 You had to know I couldn’t pass up the chance to talk about some new Swamp Thing now that our ‘Swamp Studies’ podcast segments have ended. After all, with the final New 52 Swamp Thing issue behind us the Convergence tie-in just may be the last new Swampy story we get for a very long time. So, has Convergence: Swamp Thing #1 taken root or was it booted out of the green? (NOTE: This review contains slight SPOILERS.)

Len Wein is back to write the character he co-created way back in 1971 and it is certainly a treat to read his words in the pages of a Swamp Thing book again. Wein writes the caption boxes in his classic descriptive narration style which is more on the poetic-end than most modern comics. Of course, the iconic “A shambling, muck-encrusted mockery of a man…” line appears. However, the story itself is where the book runs into trouble for me.

The book opens with a brief retelling of the Alec Holland/Swamp Thing origin that continues right through into the early Alan Moore period. It is initially thrilling to be taken back to that old shack with the dynamite and such. Perhaps Wein feels it is important to establish exactly which Swamp Thing we are reading about but it seems unnecessary and eats up several pages of this ‘new’ Swamp Thing story. From there, friend-zoned Swamp Thing and Abby are looking for answers as to why the sky has gone red and instead of searching out Superman in Metropolis as Abby suggests, Swampy insists on going to Gotham to ask Batman because he has a “feeling”.Naturally, they arrive in Gotham just in time to be sealed in by the dome. In many of the other Convergence tie-ins the heroes lose their powers while being trapped in their respective domes for the year or so until the domes are lifted. In Swampy’s case it means being cut off from the Green which is a potentially fatal situation for him. This is the drama that occupies the rest of the issue. In theory this could make for a good story but in execution it feels a little like treading water most of the time. Add that to the origin retelling and you have the whole issue in a nutshell.

Kelly Jones brings a strong horror look to the issue with his pencils and high contrast ink work. The art adds to the classic Swamp Thing feel though can be a little inconsistent at times. Swamp Thing’s look evolves constantly throughout the book as ol’ Swampy is prone to anyhow and I don’t mind that at all. At times we have a very sleek and smooth muscle-bound Swamp Thing but he also becomes very mossy and shaggy. As a matter of personal preference I like the more plant-like, disheveled look but Jones’s giant, hulking take is interesting as well. The major inconsistencies appear in the faces of the human characters (which is Abby most times). They just appear odd every so often. We also have standard style panel layouts which is fine but don’t expect the wonderfully complex panels and pages that the 2nd Swamp Thing series often indulged in.

Michelle Madsen provides some great color work including additional shading and texture. She nails the color palette with all the right shades of green and brown to set each scene. Nice reds burn up the daytime skies and Swampy’s green is complimented nicely with blues and purples during the night scenes. 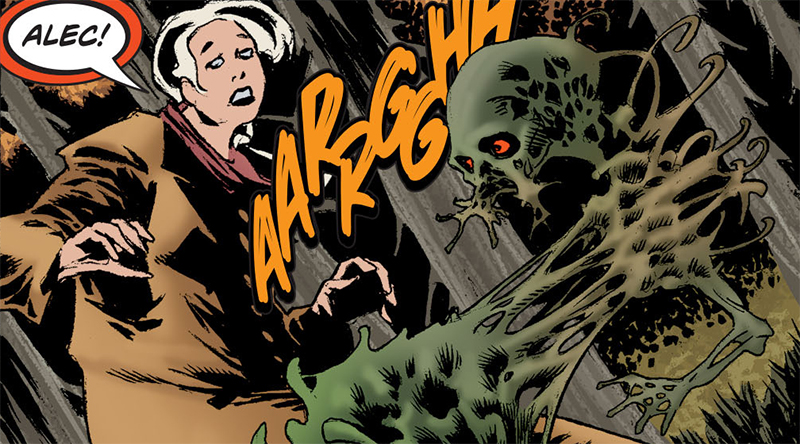 When all is said and done, this was a disappointing read for me though my expectations were pretty high. I am glad that I read it and the book is still a treat for long time Swamp Thing fans. The writing feels like classic Swamp Thing Len Wein which was great but the plot itself is lacking anything to really grab on to. The art by Kelly Jones is striking, aided by Michelle Madsen’s fantastic coloring, though sometimes inconsistent.

This is by no means a bad issue but I can’t shake my disappointment in the lack of plot here. That said, the cliffhanger ending and the teaming of Wein and Jones still has me excited to see where issue 2 takes us. Convergence: Swamp Thing #1 is taking a walk right down the middle of the road with a 2 and a half star rating from me.

Sadly, Convergence: Swamp Thing #1 and Convergence: Batman and Robin #1 are the weakest tie-ins that I have read so far. Major bummer because they are the two I was most excited for. Both seem to have the same problem, they don’t know what to do story-wise until the big battle so it ends up filler until issue 2 when the action hits.

I have read maybe 60% of the other tie-ins at this point and many of those have handled the “year under the dome” first issue in interesting ways. Far better than the two aforementioned titles. Some have taken this opportunity to explore these characters we have missed in interesting ways. Whether to show us how they have progressed since we last read them or how living in the dome has effected them. Several of these titles were “on a whim” reads for me after being initially disappointed by the stagnate Batman and Robin story. I’m glad I decided to read them, too, because they really turned my first impressions of Convergence around!

Now, I know I said I came to these Swamp Thing and Batman and Robin tie-ins with high hopes and was met with disappointment. I would have attributed this disappointment to my expectations up until I read some of the other books. Batman and Robin and Swamp Thing are (or rather, were seeing how both of those titles have been canceled… thanks, DC) among my top 3 favorite on-going series. Convergence gave me a chance to read not only the characters I enjoy the most but the versions of those characters I enjoy the most. Yet, of all the Convergence tie-ins I have read so far they have been the least interesting stories. Speed Force, Superman, Batgirl, Catwoman, Atom… all entertained me greatly! Some of those are versions of characters I’ve never even read before or had any particular affinity for before (don’t hate on me, comic community) but those stories all outshine these.

Convergence: Swamp Thing #1
Publisher: DC Comics
Available From: mycomicshop.com
Disclosure: The above link is an affiliate link. If you click through and make a purchase we may earn a commission at no additional cost to you.
Written by Len Wein. Art and Cover by Kelley Jones. STARRING HEROES FROM CRISIS ON INFINITE EARTHS! The dome has cut off all the heroes from their powers - but what happens when Swamp Thing is cut off from his life source in The Green?