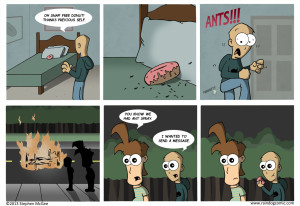 From the Vorpal Vault: This review originally ran over at: http://tankmonkeycomic.com

(Webcomic) Rain Dogs: I put this one off long enough… I knew when I started reviewing web comics that Rain Dogs was one on top of my list. It’s up there for so many reasons. First what is Rain Dogs? The quick pitch is that it’s about running a record store (actual Vinyl) in the digital age. Sounds like pretty standard slice of life stuff but not once you meet the primary characters… then you get an epic storyline complete with a retirement home full of dystopian retirees pretty much straight out of Mad Max 2 (or 3)! And that’s just in the first year! Just when you think it couldn’t get any weirder you get a extreme home makeover story arc with Humpty Hump (of Digital Underground fame) as the host?!

Now if that doesn’t already sound incredible… (what’s wrong with you!) Stephen gives you even more in the way of his blog content!The art has a unique style and the character design stays consistent, one of the funnest things to see was Stephen’s sketches from his last convention (look them up on his facebook page) because he did established pop culture characters in his unique style and it was awesome to see them all come alive in his style. 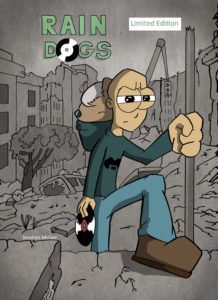 When you read a webcomic you probably come for the funny but eventually? You stay for the creator (and the funny). Stephen McGee of Rain Dogs boldly puts himself into not only every comic but also into each accompanying post. With each comic he busts out a track for “recommended listening” and it’s not just a “here ya go” and be on your way kind of post he gives you musical history mixed with editorial on each track.

When it comes to building community with his readers? Stephen may be the best at it that I can think of. He actively engages people through his site, through social media, through interviews, through guest strips… I’m convinced this guy actually has clones of himself so he can just keep bringing us the awesome (and he’s a scientist so… you figure it out). He’s been gracious enough to jump on board with the #5thpanelguest project that we threw out not all that long ago and he’s been a great sport with those… On the internet it’s so much easier to talk about the people we don’t like but I find it super easy to tell you that I really appreciate and respect Stephen. I can’t recommend his comic enough.

Right now Stephen is currently running a sale at his store which means you can get your hands on his book at a discounted rate! I cannot recommend his book more! I’d go with the Limited Edition while he still has copies… wait… Kiefer this review is for a webcomic right? Can’t I just read it for free? Yeah… I suppose you could and you TOTALLY SHOULD! But his book is so well put together, and includes such awesome extras… like his intro essay, which I really highly recommend spending the coin on the book.