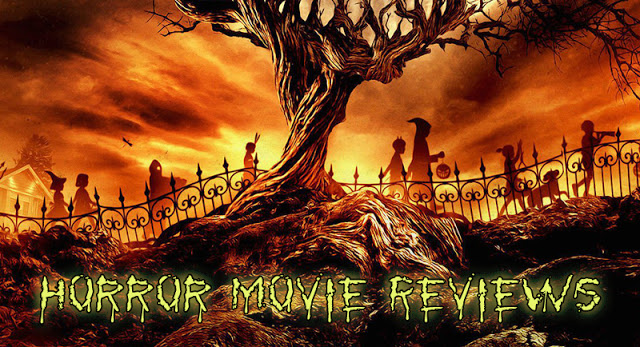 Anthology week! The 2nd to last week in my 2 month long horror movie bender is all anthology films. What better way to cram in the Halloween spookiness than collections of short horror tales told over a campfire… or VHS tape.

Grim Prairie Tales is a western horror anthology film in which a city slicker and a bounty hunter exchange stories one night out on the open prairie. I stumbled upon a VHS rip of this film on YouTube one lazy afternoon. Clicking through some random anthology playlist this movie began playing and while I was amused by the title I didn’t really intend to watch it. Until the credits started… Starring James Earl Jones and Brad Dourif. Wait, really?

Dourif is the city slicker out alone on the prairie when Jones, playing the gnarled bounty hunter, happens by. The nervous city slicker reluctantly agrees to let the boisterous bounty hunter join his small campsite for the evening. As you might expect the horror stories they tell is device in which the film presents the various segments. Four in total.

In most anthology films the framing device is typically the weakest part. In Grim Prairie Tales the wraparound segments linking the stories is the BEST part. They are magnificent! I found myself anxiously waiting for the horror stories to end so the movie would get back to the campfire and these two distrusting characters bicker and argue.

James Earl Jones just chews the ever loving daylights out of the scenery the entire time as this wild, brash yet oddly thin skinned bounty hunter. Dourif delivers an equally entertaining performance as this uneasy guy clearly intimidated by the bounty hunter though unwilling to back down from perceived insults. I could watch two hours of these two characters! This should be the whole movie… but it is not.

The horror stories themselves are not bad but ultimately unmemorable and pale in comparison to the wraparound segments. One of the four segments contain a supernatural element while the other three revolve around more real world horrors. Grim Prairie Tales has a slightly surreal feel throughout and one of the most bonkers death scenes I have ever seen! I won’t spoil it because you will NOT see it coming and it is crazy.

The second and fourth installments were the most entertaining and presented the kind of horror I was expecting from the film. The first tale was the most surreal with an enjoyably unsettling dream-like quality but by the end the most interesting thing about it was Dourif’s character’s reaction to it. The third story opted for a poignant social theme that wasn’t lost on me but dragged on much too long.

I can’t speak too much on certain aspects of the film as the copy I watch was, as I mentioned, a VHS rip on YouTube. Pan and scan no less. The video quality was terrible and the dark scenes were particularly hard to make out. Obviously this is a less than ideal way to watch any movie and I wouldn’t have with the intent to review it but it hooked me. Once I knew it was worth sharing I tried to find a legit copy but it is a fairly obscure movie. From what I could make of the production quality the sets, locations and costumes all looked pretty good which is important (and not cheap) for an effective western.

This could have been an excellent movie it if were, frankly, not a horror anthology. Which is odd given that the horror stories should be the real meat of the film. The performances, dialog, and character arcs (yes, there are character arcs!) of the wraparound segments are what makes this movie standout though. It’s an odd though pleasant experience that makes for the perfect Sunday afternoon movie. I’d definitely recommend this for the well played Dourif/Jones dynamic, one really wild horror moment, and the fact that it is a serviceable entry in very slim horror western genre pickings. Grim Prairie Tales gets 3 bizarre out of left field animated sequences out of 5.

Good Halloween Watch? I’ve yet to see a horror western that really screams Halloween so maybe not but it is worth a lazy afternoon watch.

Couldn’t find a trailer for it so, um, I’ll just leave this here…

The somewhat lawless “full movie” side of YouTube actually delivered a surprisingly entertaining treat with Grim Prairie Tales so why not a 2nd roll of the dice? Look here, an ’80s anthology flick with Vincent Price and it’s only an hour long! This could be… oh no.

Escapes is an anthology film featuring five tales “originally produced for video”. A teenager receives a mysterious VHS copy of the movie, THIS movie, and watches it. This and an intro by Vincent Price at the beginning of the tape provides the wraparound segment. Escapes is more of a fantasy anthology than horror that seems to pull inspiration from the lighter side of Twilight Zone or Tales from the Dark Side. Unfortunately here the ironic, clever karmic twists that those series are known for are just totally broad, basic, and uninspired.

Like my viewing of Grim Prairie Tales this was also a VHS rip but the video quality of the upload was much better. At times the cinematography is beautiful in a “that should be a postcard” kind of way. The heavy color saturation of the video format actually works to the film’s benefit and works best in the lush rural settings that several segments take place. On the other hand it is also very inconsistent with wildly varying color tones and framing from shot to shot. It is not very well constructed but will occasionally provide some striking images.

Much of the acting was terrible, even Vincent Price looked tired and uninterested, but there were two standout performances worth mentioning. In the 2nd of the five tales one gentleman was written and played with such charisma it was hard not to enjoy his performance. It was over the top for sure but so off kilter that it provided the high point in an otherwise drawn out and cliched story. The other standout performance came from “Jonah’s Dream,” the forth and best tale. The main character is played by a woman who delivers a solid, melancholy performance that adds a nice sense of emotional depth to the story.

Even with it’s very short run time of 72 minutes this was a slog to get through. The best segments were the final two. These seemed to be where the filmmakers focused most of their attention (and production budget). One being the aforementioned “Jonah’s Dream” in which a gold panning old woman refuses to let the dream of striking the mother load die. The location is beautiful and this segment doesn’t suffer the same slap dash production issues as the previous stories. This story also takes an interesting turn I didn’t see coming. The downside here is that the entire segment meanders at a snail’s pace. It fits the subject matter for the most part but even once something surprising and exciting happens the filmmakers dwell on it for far too long. It feels as if they were so proud of the effort they wanted to use every second of footage.

The final story, “Think Twice,” is worth mentioning for it’s oh-so-80’s urban look and tone. This departs from the settings of the other stories to take us into some hyper 1980’s grimy city alleyways and it looks great. The music for this portion takes a heavy synthesizer turn complete with cool sounding synth arpeggios… the kind of music you would envision when you think 80’s cityscapes and crime. The tale itself has an intriguing sci-fi concept though nothing groundbreaking. The real reason it caught my attention was how much it felt like a modern 80’s nostalgia homage yet was actually produced at the time. Complete with headband and laser effects. Again, the overall production was much higher on this one than the first three or the framing segments.

However, the final two segments were far from enough to salvage this mostly forgotten film. Escapes stumbles in at 1 neon diner sign montage out of 5.

Again, it was easier to find this then any kind of trailer…

Tales of Halloween is a brand new Halloween centric anthology film released just this month. Anthology as well as Halloween centered films can be very hit and miss but I was cautiously optimistic about this one. Trick ‘r Treat, which would have topped this list off nicely, has become a modern All Hallows’ Eve staple for a lot of people. Could Tales of Halloween finds it’s way onto the shelf next to it as required yearly viewing?

Right off the bat (no pun intended) the opening credit sequence was a red flag. It was a little rough around the edges visually and, honestly, kind of a mess. I started to think about Fun Size Horror Vol. I which I watched back in week 2 and began wondering if I was in for a similar experience with Tales of Halloween.

By the end of the first segment, though, my worries were gone because you know what? This movie is awesome! All the segments take place on Halloween night, interlocking with each other in some way even though each is helmed by a different director. The film is more of a comedy than I had expected but it works. It solicited legitimate laughs. It doesn’t shy away from the gore either.

While most of the stories don’t attempt to truly horrify there are several shocking moments and they all play with horror conventions. It’s a lot of bloody (in the literal sense) fun that ranges from slightly snarky ribbing to homage to straight up spoof of both Halloween and horror movies. My favorite segment was ‘Fright the 31st’ which is a ridiculously over-the-top spoof of slasher movies that had me laughing from start to finish. Even the weakest segments work well on some level.

The production quality varies from segment to segment but overall the film looks great with many lavishly decorated, Halloween themed sets and locations. Also, Adrienne Barbeau lends her voice to the film as a radio DJ in a nod to her roll in The Fog! I had a lot of fun with Tales of Halloween and plan to revisit it again next year. Time will tell if people warm to it like they have Trick ‘r Treat. Trick ‘r Treat has a more timeless and unified feel but I personally didn’t take to it on my first viewing like I have this film.

It may not be a perfect film but it is a wildly entertaining ride and total treat (okay, pun intended) for Halloween nuts and horror fans. I give Tales of Halloween 4 icky candy kisses out of 5.

Good Halloween Watch? Yes! This is what the film was made for it and they nailed it!