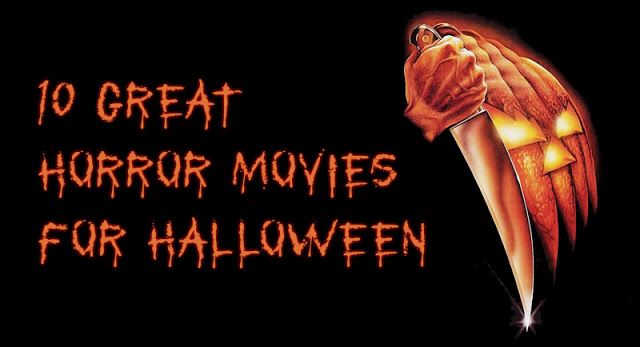 Happy Halloween! We’ve survived the horror binge this far but now it is time to break out the big guns! For the last 7 weeks I’ve been watching horror movies, mostly films I’d never seen before, and posting reviews the following week. What good are Halloween recommendations the week after the big day though?

Instead, here is my 10 ESSENTIAL Halloween movies list. These are yearly staples in my All Hallow’s Eve viewing. Many classic horror films you might expect as well as a surprise or two.

This is likely the least well known film on this list. Murder Party is a no-budget horror comedy that nods to 70s/80s horror and slasher films. The beginning and climax of the film made this an immediate favorite of mine. It is full of unlikable characters but, for me, it works as the majority of the film is a less-than-subtle jab at the “art crowd”. Give it a try for some laughs, groans, and great horror imagery.

This technicolor nightmare classic from Italian horror master Dario Argento is worth revisiting every year. The amazing (and at times bewildering) music, eye popping visuals, creepy atmosphere, and wild climax make for a great Halloween watch.

The Haunting (1963)
Directed by Robert Wise

This eerie black and white classic ghost tale remains as effective as ever. The Haunting is one of the best examples of less is more crafting legitimate tension and horror in ways that most films only dream of (particularly the awful remake). If you’ve never watched this I highly recommend you take a trip to Hill House and get prepared to be creeped out.

I wish I had gotten a chance to watch and review it for last week’s anthology post because it would pair so well with the new Tales of Halloween. This film looks amazing, has some standout segments, captures the spirit of the holiday, and introduces an ultra cool Halloween monster to horror.

The Fog (1980)
Directed by John Carpenter

Honestly, it was a toss up between this and Carpenter’s Prince of Darkness for this slot. I could easily include them both but to avoid overloading the list with Carpenter films (I’m already omitting The Thing!) I’ll opt for The Fog. Both are great films that don’t get as much mention as other Carpenter classics but The Fog feels more at home on Halloween. A sleepy coastal town is invaded by an eerie fog and ghostly figures. Creepy and atmospheric The Fog makes for the perfect double feature with the other Carpenter classic on this list.

If you are looking to make your skin crawl in the worst way you’d be hard pressed to find a better film for it than Hellraiser. Full of insane make-up FX, psycho sexual tension, bizarre characters, and seven layers of icky that just won’t wash off. “We have such sights to show you.”

I’ve heard that when this Michael Myers absent sequel was conceived the idea was to continue the Halloween franchise as an anthology series of sorts. Each movie would be a new and original horror story based around the holiday. What a great idea! I wish that concept had been followed through instead of the drug out Myers saga we got.

Halloween III: Season of the Witch isn’t a great movie but if you are game for some cheese it can be great fun. It is competently directed by Wallace though doesn’t touch the mastery of John Carpenter. Carpenter, along with Alan Howarth, does provide the score which goes a long way to elevate the film. The plot is fairly straightforward but the story itself is bananas. Bananas in a good way if you ask me. Once they reveal what is happening they just throw everything and the kitchen sink in.

Here it is… Halloween. The title says it all. This is, for me, the definitive Halloween movie. It is thoroughly entrenched in the holiday without forcefully pushing it at you. The tact and superior directing by Carpenter is so evident after having watched so many slasher movies back in week 2 and week 3 of my movie binge, most of which exist as a direct result of this film’s success. The first two acts of the film are a slow, methodical build-up to the climax but everything is wonderfully shot and fascinating to watch. For me, this one single entry in the franchise is the ultimate Michael Myers story. I don’t subscribe to the idea that you have to watch the 2nd film with this (or ever) because how this film ends leaves a more interesting and mysterious mythos to the character. That is as Carpenter and co-writer Debra Hill had intended… until, you know, money reasons.

The Exorcist (1973)
Directed by William Friedkin

Halloween, The Exorcist, and the final movie in this list are all very high on my Top 10 Horror Movies of all Time list as discussed on the October episode of the podcast. If you are simply looking for the creepiest, most terrifying film to watch on Halloween The Exorcist is your go-to. Atmosphere so thick with dread and tension it could snap a knife. The film assaults you with subtle, psychological as well as brash, shocking (even by today’s standards) horror. Every scene, particularly the quiet ones, works to unsettle the viewer. There is a reason this is at the top of the horror lists.

The Shining (1980)
Directed by Stanley Kubrick

The Shining took the number 1 spot on my top ten favorite horror movies so it is hard not to include it here. Halloween is a great time to watch this film, particularly as the weather starts to turn cold and we round the bend towards winter. This is a horror masterpiece. Amazing performances, beautiful cinematography, and an oppressively brooding, uneasy atmosphere throughout. With the psychological impact of each shot considered and Kubrick’s meticulous eye for detail the film is still discussed and debated today.

That’s it for this Halloween. There are still many movies that could have made this list and even more I wish I would have had time to include in the binge. Over the past 2 months I’ve watched a lot of new-to-me movies that I enjoyed including several hidden gems. What is on your list of Halloween essentials and what should I add to next year’s inevitable horror binge? Have a good Halloween!