Doctor Who: The Ninth Doctor

Doctor Who: The Ninth Doctor

Available from Things From Another World

Look it’s possible but still relatively unlikely that someday I’ll get to review 9th doctor audio plays by Big Finish. So rather than wait around for something awesome that may or may not ever happen I realized I still had a stack of Ninth Doctor Comics to read and I knew I had to jump at the chance to add NINE to my reviews.

In fairly recent news it was announced that Titan Comics will be going forward with a 9th doctor ongoing comic based (presumably) on the success of their 9th doctor mini series. I had started this series but had kind of stalled on it while I waited for some delayed monthlies to come in. Recently though the final issue came in and it was time to finish the story!

First off let’s back up, Titan has been killing it with these new comics. I enjoyed the IDW runs of Doctor who but I think Titan has the right idea. Sure we want new stories of the current Doctor cuz we ALWAYS want more but the real magic of these comics properties is that they can give us more of things we don’t get anymore! Buffy the Vampire Slayer isn’t on TV anymore? Uh there’s a comic continuation that’s been going on for a good long time, Jericho? Seasons 3 and 4 came out in comics. Doctor Who? Since Titan grabbed the license we’ve gotten 12, 11, and 10 with their own ongoing stories 9 and 8 with mini series stories, a 4th Doctor Mini on the horizon and now the 9th will get his go in an ongoing? Yep that’s the magic, not getting more of what we HAVE but getting more of what we HAD and now can’t get anymore.

Now I’ll admit sometimes these retro tellings are less than worth it as writers try to tread lightly especially when it comes to stories that people have a fondness for. When it’s your favorite cartoon from your childhood you are often willing to look past the warts or how dated it is but try to update it? And then someone decides to bring it back for modern audiences and you get a Garfield movie. OOF! Thankfully that’s not the case with this Ninth Doctor mini written by Cavan Scott with interior art by Blair Shedd.

This mini takes place right after “The Doctor Dances” televised story. Jack has joined up and we get the TARDIS team of Rose, Jack, and Nine. The story give us perils all over the place and it’s hard to figure out who is the proper “bad guy” sound like a proper Doctor Who tale? That’s because it totally IS.

The dialog is written so well, I hear John Barrowman every time Harkness has a word bubble, I hear the sass of nine every time the Doctor gets one, and Rose is that early Rose just starting to feel confident as a time traveler still second guessing her choices but brazen enough to follow her gut instincts even to the surprise and dismay of her companions.

The art is convincing (the ninth doctor is NOT the easiest to draw either let me just tell you…) and never leaves you wondering who is WHO (see what I did there?)

If there’s any criticism, and it’s not really a criticism… it’s that this is clearly a “comic” story the alien threats are way too tricky for television. We have silver space centaurs vs. analytical Juggernauts and at one point they visit an interplanetary black market on a planet next to a dying sun. The budget for that on TV would render impossible so that bit is a little Jarring but next to “Cassandra: the last human” it’s not that weird for a Ninth Doctor story.

I really enjoyed this Miniseries and I’ll be looking forward to more 9th Doctor from Titan Comics.

REVIEW – Doctor Who: The Rani Elite

Doctor Who – 9th Doctor Vol. 1: Weapons of Past Destruction 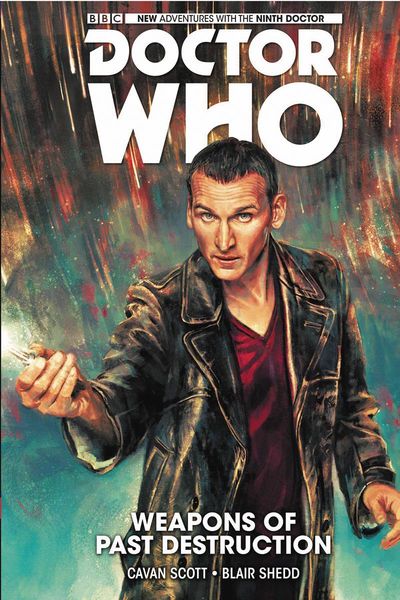 Doctor Who – 9th Doctor Vol. 1: Weapons of Past Destruction
Publisher: Titan Comics
Available From: Things From Another World
Disclosure: The above link is an affiliate link. If you click through and make a purchase we may earn a commission at no additional cost to you.
Leaving World War II behind, the ninth Doctor, Rose, and Captain Jack discover that Time Lord technology, lost in the wake of the Time War, is being sold on the intergalactic black market! Now the threat of a new temporal war brews on the horizon, with the Doctor and his friends caught between the twin threats of the Unon and the Lect, two species with intertwined histories who are jostling to replace the Time Lords on the universal stage. Can the Doctor stop history repeating itself?