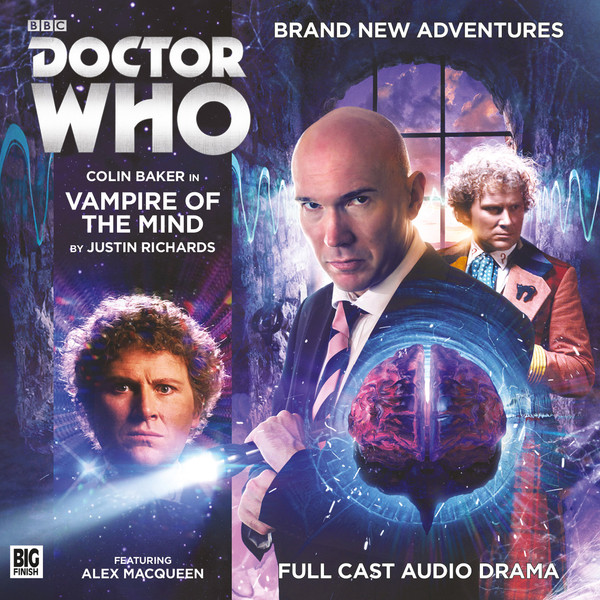 “… and anything The Master can do, I can do better.”

Zombies, Mind wiping creatures, disappearing scientists and… The Master vs. the Sixth Doctor! This Month’s Main Range Doctor Who offering continues a series of Big Finish stories celebrating the 45 year anniversary of The Master!According to the Big Finish Solicit:

“Somewhere off the South Coast of England, there’s a lonely island. On that island stands a solitary castle, long since abandoned – haunted, they say. But the truth is, that castle houses something far worse than mere ghosts.

The castle is what lies at the end of a trail followed by the Doctor in search of several missing scientists – all of them connected to the top secret Dominus Institute and its elusive CEO, Sir Andrew Gobernar…

But the Doctor will soon discover that he’s the one being haunted, by a ghost from his past… or perhaps, his future.”

If you haven’t been paying attention you might not know that Big Finish has their own master in the form of Alex Macqueen. If you’ve been reading my reviews you already know I’m a fan.

This story pits a future form of the Master up against an incarnation of the Doctor that should not have met him yet. (The Seventh Doctor meets him in UNIT: Dominion and it is GLORIOUS, I highly recommend it) it makes this story bittersweet because the chemistry between ole Sixy and this Master (presumed to be placed somewhere between Eric Roberts Master and John Simms Master) was palpable! I’d love love LOVE to get more stories between these two but the stage has to be set for the 7th Doctor to eventually meet him.

This story is very clever in that it ties so much of the Master’s history with the Doctor into the Master’s Future with the doctor and yet you could totally enjoy this story without knowing ANY of it. Which makes this tale one of the best possible scenarios for a new listener coming into a story involving these two.

I was enthralled! This story grabbed hold of me right away and never let go. It’s not that this story was non stop action, it’s that this story was non stop compelling. Each new reveal was a fun addition to the narrative. The supporting cast was as delightful as the main characters and it’s clear that everyone involved knew how to keep an audio story lively and interesting. I gave last month’s story “And You Will Obey Me” a five star rating, well if I could, I’d give this one six (see what I did there?) because somehow I enjoyed this story even more. 5/5 stars with flying colors (cuz the sixth doctor’s coat).

Big Finish has now given us new regenerations of The Master, The Rani, The Meddling Monk, and Romanna. What’s your favorite Big Finish regeneration character? OR who would you like to see a new regeneration for? Let me know in the comments below or by shooting us a message to letters(at)grawlixpodcast.com.

DCBA of the Week – September Week 1