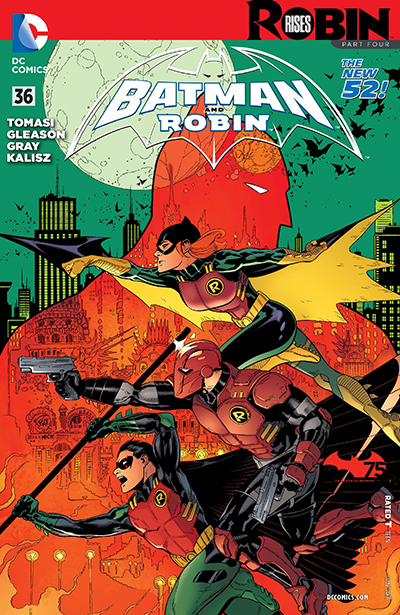 “You’re STRANGERS and it’s BETTER to eat strangers than family.”

Batman and Robin #36, written by Peter J. Tomasi with pencils by Patrick Gleason, is another solid entry in the Robin Rises story line. We rejoin Batman bashing his way across Apokalips in a super powered Bat-suit to retrieve of the body of his son, Damian Wayne. Batgirl, Red Hood, and Red Robin, all in fancy Robin costumes — you know, because reasons — have followed Bruce to Apokalips. Also accompanied by Cyborg and Titus. Yep, even the family dog is involved!

This is a full on action ride from open to close! Batman is angry, so angry, and doing his ‘self-destructive but all according to plan’ bit. And it is awesome. At one point he even yells “I’m Batman!” as he takes on legions of Parademons and whatever other strange creatures Gleason has penciled into the several splash pages. 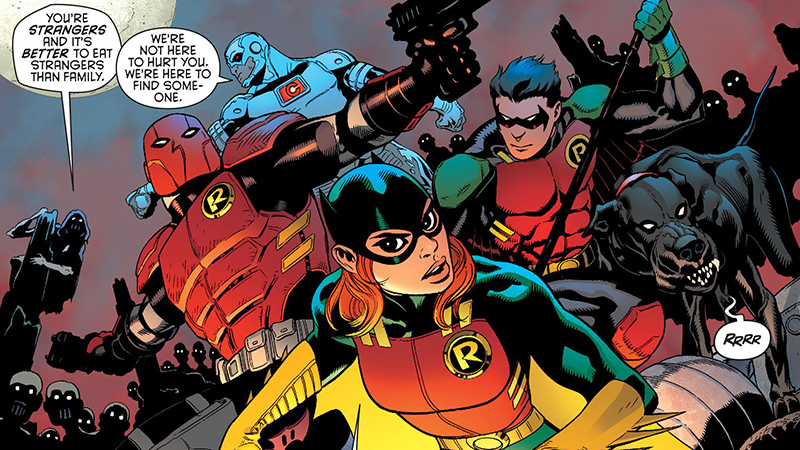 Meanwhile the rest of the crew are fending off their own hordes of creatures bent on having them for dinner, not in the friendly way. Having Titus there sounds fairly goofy but actually works and he gets his own heroic moments. Batgirl, Red Hood, and Red Robin clad each in their own unique Robin outfits makes for some cool images as they battle against the backdrop of Apokalips.

The artwork really shines in these Apokalips issues. Gleason lays the action out large and dynamic and the inks by Mick Gray give the art some serious weight. The color by John Kalisz is bold against the thick blacks with some very nice texture work in the backgrounds. The fiery color palette adds to the hectic feel making the issue title of ‘Chaos’ all the more fitting. 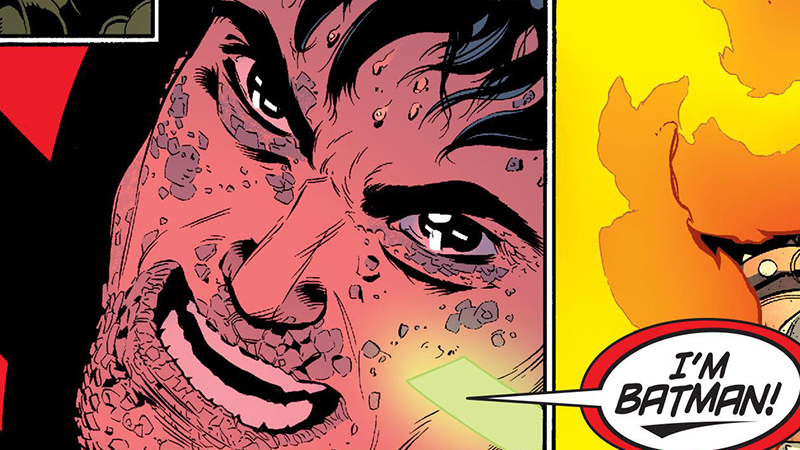 This is a fun, frantic issue continuing the thoroughly enjoyable Robin Rises story line. Being an action heavy issue it naturally sacrifices some plot development which is the only the only thing keeping it from a 5 star rating. Even amid the chaos we get a nice moment of character development as Batman is beginning to recognize and reel in his anger, at the same time letting his “Bat-family” in. He is even placing trust in their judgement which has been a long running conflict in not only this title but other Batman titles.

I highly recommend this issue as well as the whole Robin Rises story thus far, a concept I initially had apprehension about. Tomasi and Gleason have been on Batman and Robin since the New 52 relaunch and all in all, they are nailing it!

Doctor Who: The Secret History Review