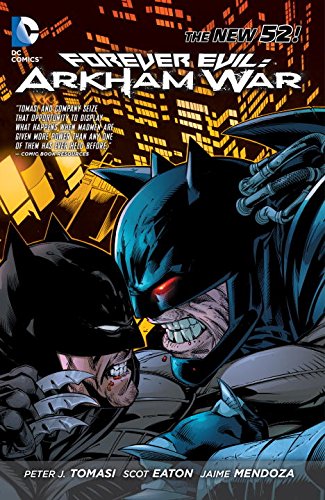 “Someone moved the damn moon over the sun, the Justice League is dead, the lights are out, Gotham’s been split between a dozen homicidal Arkham escapees and our secret weapon is gone… probably for good. I don’t know what Bane wants– or why he came all the way back from Santa Prisca– but I think it’s okay to be shocked now.”

As Commissioner Gordon has so succinctly established for us, Gotham has been plunged into eternal night and with no power or superheroes to keep order the city has fallen to chaos. Penguin has stepped in, carved up the city and dealt out each district to various Arkham rouges. Of course this only adds to the chaos but allows Penguin mayoral-like control over the city. Enter Bane, army amassed, poised to take control of Gotham now that it’s resident protector is M.I.A. With the assistance of Gotham’s more “sane” criminals, Blackgate inmates, Bane heads to war with the Arkham escapees.

While taking place during and facilitated by the larger plot of the Forever Evil event Arkham War manages to stand more or less on it’s own. Outside knowledge by the reader is not required but leading into and coming out of the story without it may be a little jarring, particularly during the conclusion.

Familiar Batman villains are speckled across nearly every page of this book which helps to keep this Batman-lite tale rooted in the Bat-corner of the DC universe. It is these villains that the plot revolves around. There is a subplot involving Gordon but his involvement diminishes and seems mainly to serve the theme of hopelessness. Instead of picking a villain or side to direct the readers sympathy toward, writer Peter J. Tomasi fills the plot with double-crosses and the back and forth power struggle with-in the warring factions.

Watching the various villains scramble towards the next point of battle or advantage works well at times though doesn’t always pay off in a satisfying way. The majority of Arkham War is an action book, as one would expect, and there is a lot of it. The dialog and panel layouts are easy to follow and the battles are massive with baddies filling the pages.

Often times, though, the action sequences opt to jump between characters as they deliver short bits of dialog sacrificing fluid motion for disjointed snips of chaos. When these bits of dialog are not used to further the plot they are the most baseline Batman villain puns. In a different book the one-liners could be taken for cheesy fun but in the context of Arkham War’s established dark tone and artwork they fall eye-rollingly flat.

Bane is the true main character here.  The story opens with the most Bane-centric issue of the collection, Batman #23.4: Bane. While the book does jump between sides and a few of the key players in the plot, Bane continues to take center stage and of all the characters his is the viewpoint the reader is given the most insight. There are plenty of hard-edged Bane moments to be enjoyed but it doesn’t take long before the character becomes one dimensional. He delivers the same message over and over again, whether as a rally speech or his own inner monologue.

Some of the characterizations are spot on, for example the Penguin and his customary conniving is a high point. As one sided — or perhaps single focused — as Bane is, he is written true to character even if his end goals do get a bit muddied. On the flip side of that, more peripheral characters like Professor Pyg, who admittedly spouts ridiculous nonsense to begin with, and Poison Ivy are reduced to a simplistic one-liner machines. This ties into the aforementioned mismatch of tone, the primary weakness in the writing.

As a trade paperback the art varies a bit in sections as different artists handle different issues that the book collects. The art does dip in quality for a short time but most of the book has very nice pencil and ink work. The look is still surprisingly cohesive, pulled together by a consistent color palette and superb color work overall. It is not the kind of coloring that pops off the page but, fitting the eternal night setting, a more muted palette that seems in line with this period of many DC Comics titles.

Forever Evil: Arkham War takes a moment to get going but once it does it rolls along at a good pace that held my attention but never really had me invested. Tomasi takes a good stab at filling out an otherwise unnecessary mini-series set within a larger event. He keeps the plot forever moving forward. There are a few turns in the plot that are truly over-the-top and while they sound fun on paper don’t really work in context. These moments didn’t kill the story for me but the majority of the plot serves to set up these big moments and they just don’t come across as memorable or as fun as perhaps they were intended.


Rating: 2.5
Batman is missing, the power is out, crazies have taken over Gothem, and Bane just arrived with an army. Can Gotham survive the Arkham War?

REVIEW – Doctor Who: Planet of the Rani