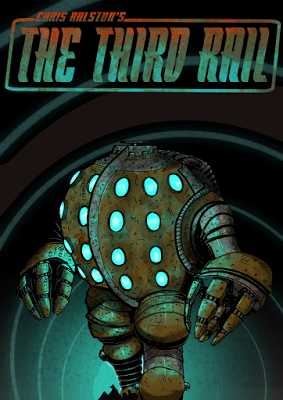 I’ll just start by saying… this is the absolute hardest kind of review to write. I’ve started and restarted this review at least three times. Why is it so hard? Well I mean, on top of not having written a review in a while, I know and like Chris Ralston. That means a few things:

While I’ll try my best to write the best review ever, what I’m ACTUALLY going to try even harder to do is FINISH this review because a hundred do-over reviews that never get published is not going to convey why you should check out R10 Creations and the work of Chris Ralston. So here goes nothing:

R10 Creations is the umbrella studio for the visual and written oddities spilt forth from the mind of the wildly demented Chris Ralston. That might not sound like high praise but if you’ve been paying attention to my reviews or my comments on The Grawlix Comic Book Podcast then you already know that if it’s a bizarre concept then you already have my initial attention so wildly demented is just a great conversation starter in my book.

(Webcomic/Print Comic) The Third Rail: When I first met Chris Ralston it was at a smaller con in Lincoln Nebraska, he was set up at a table diagonally across from us and if I recall correctly I believe he was the only other artist that had an abundance of pop culture and specifically comic book style or related artwork. Not only did he have the usual one off pop culture pieces for sale but he also had issue zero of the Third Rail for sale. On first look I thought it looked to be vaguely steampunk which I don’t really know much about. I’ve long enjoyed the work of artist Eduardo Paolozzi and steampunk seems to share some similar visual motifs so it feels like a thing I should enjoy but I just haven’t dove in on any yet. I digress, the point is I don’t know the genre but I like the style.

Since that convention Chris has sort of relaunched The Third Rail in that he’s tweaked the style he’s using to tell the story and is releasing it online as a webcomic as chapters but from what I can tell the premise of his original concept is all still there.

Now while I was stuck on the steampunkyness (that’s now officially a word. Yep it’s canon) Chris was quick to point out that while it’s not NOT steampunk it’s not ENTIRELY steampunk. The following is more my interpretation than anything but… It’s more like mystical/technological/post-apocalyptic/steampunk… set in America. You follow so far?

Let’s just say for the sake of brevity that you do and I’ll press forward. If my summary is too vague (and it totally is) then here is the synopsis right from the website:

“In 1895 scientists and mystics tried to combine their talents to create a power source that would end the need for future power sources. The resulting cataclysm tore holes in reality releasing monsters and radiation throughout the world. Cities fortified themselves and took in as many people as they could.
The city of North Platte was the largest railway connection in the United States at the time. To protect the city it was put up on rails and started migrating through the States between the Great Lakes and the Gulf of Mexico. This city’s name was changed to New Platte and now boasts itself the biggest trade city in the world.
One hundred years later the city has grown, being built on top of itself countless times.
This is the tale of the people who have come to call New Platte home.“

In the first Chapter which you can read right now at: http://thethirdrail.thewebcomic.com/ we follow a band of scavengers as they try to find salvage in what apparently is a very dark and dangerous seemingly subterranean place. We also get a peek at one of the settlements and get a feel for what seems to be an established class based society. Chris writes very conversationally and lets the characters tell the story as opposed to relying on inner narration or thought balloons. Yes I know the first page has a character musing to themselves but that’s used to ease us into the world and the rest of the time we are shown and not told what is going on.

I mentioned that Chris has changed his style on this a bit, from Issue zero till now it went from being VERY anime/manga style influence to more referential of that style of art. The clear stand out is Chris’s use of contrast and value. Most of the action in Chapter One takes place in the dark or in dimly lit areas Chris plays with page layouts and carefully renders each page to keep this feeling of being in a cave while still allowing us to see just what is happening. His character design is evident in that each character is distinct while all sharing the same visual style at no point am I confused about who is who. Also issue zero was black and white where chapter one makes good use of color but not in an overwhelming way. The muted color tones help to inform what kind of world this is.

I definitely recommend giving the Third Rail a look especially since it’s free to read on the web, but hang in there I have more to say about Chris’s work but first… 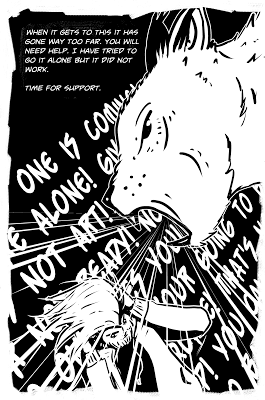 Okay so this is usually where the review is over and I just give you a list of links but The Third Rail is the the beginning. I’ll try to keep it brief but in my opinion some of my favorite work that Chris is doing is happening over on his Patreon. Now I know that Patreon isn’t a traditional distribution model for taking in comic art but Chris’s Patreon is like one part production journal, one part blog, and one part comic launching/testing ground.

In the down time between chapters of The Third Rail Chris has been playing with a story called Squirrelpacalypse. It’s a series of comic shorts and a series of images depicting squirrels both as cute and monstrous. So far he’s released a series of pages culminating in a short entitled “The Commute”, his run of Squirrel themed Inktober pieces (pieces completed in the month of October), and a zine using Squirrels as a metaphor to explain feelings of self-doubt which tends to be common especially among artists and creatives. I love the concept but it’s visually pushed forward by continued evidence of Chris’s command of contrast. Many of these pages are stark black and white but they carry a lot of visual weight.

I recommend thinking about chipping in on Chris’s Patreon because I think there’s some really cool creation happening there and I personally have really enjoyed what he’s sharing on there I think he’s using Patreon the way it should be used, to connect with people who like his work and give them the genuine look behind the scenes in an honest look without sharing too much personal information (or TMI as the kids like to say).  However if you just can’t justify throwing money at a creator right now you can still follow what he’s up to on numerous social media channels. So I guess I’ll wrap up this wordy review with my usual list of awesome links to Chris’s stuff and a genuine plea that you pick at least one of the links below and click on it because I think you’re going to find something on the other side that will make you smile, or think, or both. 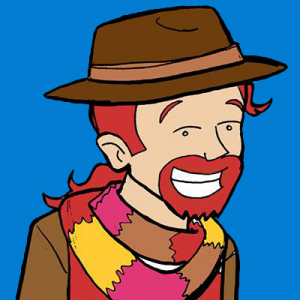 Jesse Kiefer is a webcomics creator, art teacher, puppet enthusiast and long time comic book reader.  His webcomics include Tank-Monkey and Just For Kicks.  What is he reading most of the time?  IDW titles of licensed 80’s properties.