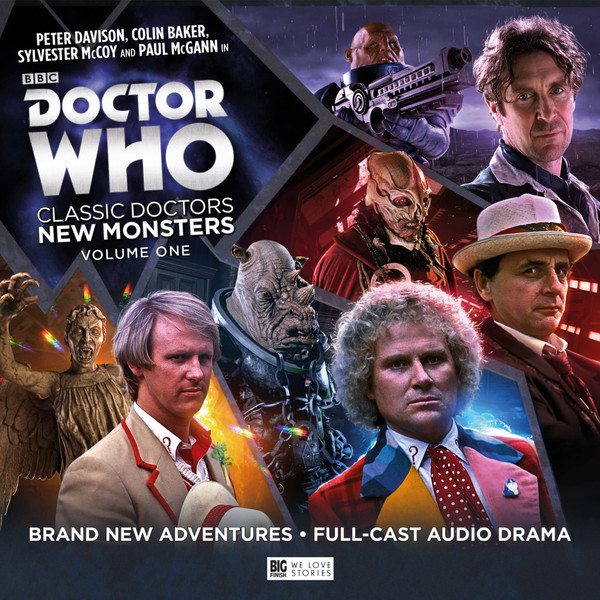 When it was first announced that Big Finish had acquired the license for all Doctor Who up to and including Matt Smith’s final episode the mind boggled. The gates were wide open and the Big Finish sandbox had just become even more interesting than we had reason to previously hope for. The Big Finish crew did not wait long to impress by announcing early on that coming in 2016 we would get Classic Doctors with New Monsters. Which seemed right in line with how Big Finish has always respected their classic Doctors making this set the best possible news. I think I had an initial fear that if we were given the new Doctors that might become the new focus of Big Finish. This announcement sent the message, early on, that they would be doing clever and interesting stories not just expanding the lore of currently pined for modern doctors. (Don’t get me wrong I was just as excited as anyone to hear that we would be getting more Tenth Doctor stories, but hearing we would get New Monsters for our beloved Classic Doctors was the news I didn’t even know I was hoping to hear.)

The Set – The premise is simple, Classic Doctors paired up with monsters from beloved modern series stories. Weeping Angels, Judoon, Sycorax, and Modern Sontarans round out this first volume of stories. I think the chosen monsters were carefully considered as was the Doctor they would ultimately be paired with.

The Solicit from Big Finish Reads:

“2015: When sightseers Joel and Gabby Finch encounter a strange man in Edwardian cricketing garb in the Sistine Chapel, their honeymoon suddenly takes a terrifying turn.

1511: Michelangelo is commissioned to create some very special sculptures by a mysterious sect. But as he carves, angels seem to emerge fully-formed from the rock. Almost as if they are alive…

From Michelangelo’s workshop to the catacombs of Rome, the Fifth Doctor must keep his wits about him and his eyes wide open as he confronts the Weeping Angels.”

You know how I love my art references in a Big Finish Audio. (editor’s note: if you don’t… check out my Waters of Amsterdam Review here.) So 5th Doctor meets Michelangelo? Yes sign me up. Oh there’s weeping angels too? UH… WIN/WIN!

Now the weeping angels definitely had their go in the modern universe so you might wonder how an audio version of a highly visual monster could possibly be successful, well that’s exactly what Big Finish DOES. They take something from a visual medium and they make it work in audio in ways that only they can. This one is down to the Sound Design team, writing, AND direction because in every way this story might fail it pulled through and delivered. This story has fun and clever nods back to Blink while giving us a new Angel story at the same time holding true to what the 10th Doctor would know about them in their televised premiere. This story gives us a clever and fully realized prequel to blink.

Judoon in Chains (by Simon Barnard and Paul Morris)

“The Sixth Doctor is no stranger to courtroom drama, but faces a very different challenge when he prepares to defend a most unusual Judoon.

After an environmental clearance mission goes wrong, Captain Kybo of the Nineteenth Judoon Interplantary Force is stranded in Victorian England, bound in chains, an exhibit in a circus show. But he has allies: Eliza Jenkins – known to audiences as ‘Thomasina Thumb’ – and the larger-than-life ‘clown’ in the colourful coat.

Uncovering a trail of injustice and corruption, the Doctor and Kybo soon find themselves on trial for their lives…”

None of the stories in this set involve the Doctor with an established companion so it’s anyone’s guess when in the Doctor’s timeline this one is set, but it clearly happens sometime after the Trial of a Timelord as he references the fact that he’d rather NOT be in a courtroom again.

Who would have thought that a new Judoon story would be the crown jewel of this box set? Well for me this one was it. The Judoon strike me as a pretty one dimensional monster. Their modus operandi is to follow the letter of the law and enforce it. Well in this story we have a Judoon who understands shades of gray, and it makes for some interesting conflict and mystery. Top marks for this one, also Nick Briggs deserves a lozenge and a good long break after doing that Judoon voice unmodulated for an hour long story. This story is likely my favorite of the entire set.

Harvest of the Sycorax (by James Goss)

“In the far future, humanity has a remedy for everything. Whatever the problem, Pharma Corps has the answer and a designer disease tailored to every human’s blood-type. Zanzibar Hashtag has no need to be sad, scared, stressed, or depressed ever again.

That is, until vicious aliens arrive on her space station intent on opening its Vault. What will it mean for the human race if the Sycorax take control of what’s inside?

And when the Seventh Doctor arrives on the scene, can he convince Zanzibar to care about her life long enough to help him?”

Okay, to be honest the Sycorax are one of the more forgettable one off monsters of the new series for me. I mean a lot of setup happens in that initial 10th Doctor episode and their actions wind up having a decent amount of impact but as a focal monster? They only feel like a huge threat until they aren’t anymore. When the 10th Doctor made such short work of them it really kind of hurt their potential for future tales but this story reminded me just how interesting they could be and once again the 7th Doctor was a spot on perfect pairing for the Sycorax. His wit and ability to plan several steps ahead makes him a very entertaining version of the doctor to put up against these highly aggressive aliens.  His strengths pitted against the strengths of a monster that can use your blood to take complete control of you makes for yet another gem of a tale.

The Sontaran Ordeal (by Andrew Smith)

“An instant of the Time War brings centuries of conflict to the planet Drakkis, and the Eighth Doctor is there to witness the terrible results.

A Sontaran fleet, desperate to join the epic conflict, follows in its wake to take advantage of the fallout. But when Commander Jask is beamed down to the ravaged surface, there is more to his arrival than first appears.

Soon, an unlikely champion joins forces with the Time Lord to fight for the future of her world, and together they must face the Sontaran Ordeal…”

This one felt the least “novel” to me, but only because “new” Sontarans don’t seem all that different from “classic” Sontarans, so really setting this during the Time War is the only thing that feels particularly new about this tale. Do not however take that as a criticism of the story. Doctor Who veteran Andrew Smith turns in another great script, in comparison to Judoon and Angels this might not “seem” like the most interesting story of the set but regardless of your preconceptions Smith spins a compelling tale of intrigue.

There’s a lot of story packed into a single hour of disc here exploring some of the collateral damage the Time War created. That may be more interesting even than the “monsters” in fact… maybe in this tale the Sontaran isn’t the monster? Maybe it’s the War? Or Maybe it’s the Doctor himself? This tale fits right in with The Night of the Doctor minisode that came out just before the 50th anniversary special.


Final Thoughts on this Box Set

Purchasing this set was a no brainer. Curiosity alone would have demanded that I purchase this set, but the sheer quality ensures that I’ll be back for volume 2. There is not a lame story in this set. I also like that this set went for the weeping angels but didn’t just grab ALL the big iconic monsters of the modern series so much as they grabbed monsters that fit into really compelling stories. I think a fair amount of forethought went into this set and it shows in the high quality end result.

What did you think of this premise for a box set? Did you like the idea or did it seem gimmicky to you? What pairing would you like to see in future sets? Tell me in the comments below or send us e-mail to letters (@) grawlixpodcast.com or even tweet me at: @jessekiefer